Posted at 11:04h in Uncategorized by InternUser Osa Conservation 0 Comments

Have you ever seen the Exaerete, the bright green bee as long as your finger?  What about the Euglossa, known for it’s metallic blue, green, or red body? These insects and many others like them aren’t just any bees—they’re Orchid Bees.  The Euglossini (the umbrella term for Orchid Bees) are some of the most important pollinator insects of the Neotropics, known for their unique coloring, size, and even shape.  Their bodies can be partially metallic or covered in brown or black hair.  From Mexico to Argentina (and Florida where they were accidentally introduced), Orchid Bees rule the bug world. 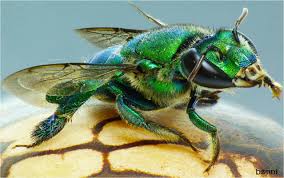 Euglossini collect nectar, pollen, and resin from plants just like any other bees, with an added special trait—they collect “odoriferous compounds”!  What, you may ask, is an odoriferous compound? Well, it’s just a fancy way of saying that Orchid Bees collect fragrances from very specific species of orchid.  Each species of Orchid bee has a fragrance preference and each orchid has a specific fragrance.  Ultimately, this means that specific species of Orchid bees are attracted to specific species of Orchid! Not only does the Euglossini collect the fragrances, but it also uses them for courtship purposes.  In other words, the male Euglossini has evolved to be extraordinarily picky in the smells that it collects and uses to attract a female to mate with.  Additionally, because the orchids are pollinated as the bee collects the fragrance, some orchid species are more likely to be pollinated than others. 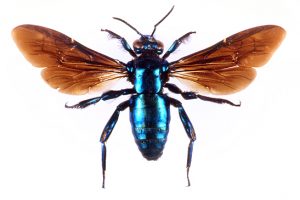 Unfortunately for all you Orchid enthusiasts, this is potentially bad news.  Orchids have evolved to specifically cater to an Orchid Bee’s preferences, meaning that many orchids can only be pollinated by one or two species of Orchid Bee!  Additionally, estimates say that the survival of around 700 species of orchid (equivalent to 10% of the Neotropical Orchidae) is dependent solely on the existence of these insects! Yep, you heard me—no orchid bees means no orchids. Think twice the next time you have the urge to swat a bee!

Despite this risk, orchids are relatively self-sufficient and have some amazing (and creative) adaptations to ensure pollination.  Enticing bees with scents of vanilla, cinnamon, and even rotting meat is just the beginning.  As a bee crawls into the flower of an orchid to collect the perfume, the orchids actually glue packets of pollen (called pollinaria) onto the bees in places where the packets will not easily rub off.  Now, the pollinaria will pollinate the next flower of the same species that the orchid bee visits.  In this way, the bee’s pollination is more efficient and more orchids are pollinated!  This relationship is often described as asymmetric mutualism, which means that both species benefit from each other without completely relying on the symbiotic partner for survival.  Even though some relationships between Orchid Bee and orchid rely more on each other, for the most part there are multiple pollinators for every orchid and additionally multiple orchids for every Orchid Bee.  This asymmetric relationship isn’t just mutually beneficial, but it actually has really influenced the evolution of the orchid bee, allowing a male Euglossini’s preferred fragrance mixture to evolve rapidly when there is a disturbance to the system, such as an environmental disturbance, allowing both the bee and orchid populations to be resilient. The relationship between Bee and orchid attests to the power of nature to overcome challenges and evolution as nature’s problem-solver. 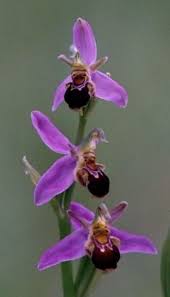 “The Role of Asymmetric Interactions on the Effect of Habitat Destruction in Mutualistic Networks” http://journals.plos.org/plosone/article?id=10.1371/journal.pone.0021028