Posted at 23:41h in Volunteers and Visitors by projects 0 Comments

A few months ago it was suggested to me by my wonderful DC coworkers that I go down to the Osa Peninsula in Costa Rica, visit our field stations, and maybe, just maybe, consider taking a permanent role on-site volunteer coordinator.

At first, as usually occurs with any life-changing event, I was slightly skeptical. Sure, I had worked for Osa Conservation for over a year, supported it’s projects, and had a deep rooted fascination with being able to work “in the field,” but I had also lived most of my entire life in the Washington DC area. I had my friends, my life, my work, and my beloved dog to think about.

Well as it turns out, as some of you may have read in my previous blog post, I did end up going down to the Peninsula to investigate this idea – and in case it’s TL;DR – I fell in love . 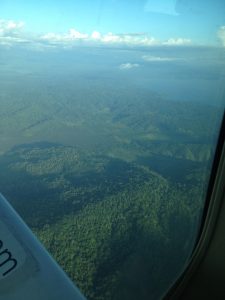 As I write this now, I have officially been here in Costa Rica as a permanent employee for less than a week since my arrival at 7 pm on Monday. Already though, I can safely say I’ve made the right choice.

So how do I know that I’ve made the right choice having only been here for 6 days? Well…allow me to present an assortment of photos, each with captions, of how already in less than a week I have accomplished more a than I would in a month in otherwise – and for the record, I have not been resting and vacationing about as I promised myself I would do this first week, I have been working. And full 8 hours, too!

Day 1. On 5 am Monday morning I arrived at WAS airport – as some of you may (or may not) know Blizzard Juno (the snowacolypse that could have been) came around the East Coast at that time and stranded (for no reason) some 1,000 or so flights. As it turns out, my 6 am flight to Florida was not one of them. A good sign, I’d say. I arrived in San Jose in the evening and the weather read wonderful. 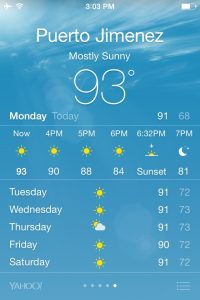 From Blizzard Juno to 90 degree weather? Yeah. I made the right choice.

That evening I set up my room, unpacked, and went to bed rather fast. I didn’t even hang up my mosquito net. 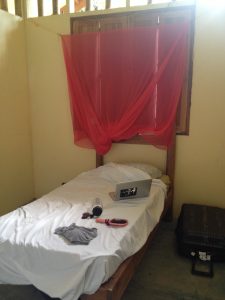 Some day I will hang up my mosquito net properly…

Day 2. A pretty normal day, it was almost too normal, as I worked on arranging some itineraries, usual stuff, but I also learned to ride a motorbike for the first time. Yeah. It literally happened just like that. I was sitting in the common area of the staff house minding my own business, and my co-worker looks at me and says, “Do you want to ride my motor bike.” The answer is Duh – that sounds horribly unsafe and wonderful. So I rode my first motorbike, and only fell twice as gracefully as a cat! (Picture Here) I blame the bike, it was heavier than me.

Day 3. I’ve noticed that right around here time is already starting to matter less than it does in the chaotic world of catching subway trains, commuting for hours to work, and meeting people at set hours in set locations. I went and did some stream monitoring with our Science Director, Jim Palmer, and his assistant, Erin, and lets face it, if my job entails walking around sampling streams every now and again, then…it’s hardly a job, I’ll consider this a perk (this is what happens when you spent 4 years studying marine biology I suppose). I wrapped up my day with a bit more work and even managed to hang up my mosquito net. 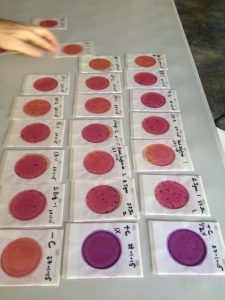 So many E.Coli samples!!

Day 4. At this point I already have to go back and look at the photos of my week to keep everything straight. I was invited to accompany our feline investigator, Juan Carlos, and our CEM, Wanda, to a local ecolodge that hosts talks about the local Osa Peninsula wildlife monitoring programs. It was quite a nice experience, and after we began to leave we had a wonderful encounter with a curious snake. As we all lazily hopped into the truck, Wanda so calmly and gracefully says, “Gee, uhm. You know Juan Carlos, if by any chance you could maybe slow down a bit, I think there may be a snake crawling in through the window…” Yes. There was a snake. I confirmed from the back seat that I could see it, and I even managed to take a video of the whole ordeal, but long story short, the snake crawls into the car, slithers past the dashboard, wraps around the steering wheel, and decides to calmly exit the vehical via the driver side door. It was all rather entertaining to watch from behind, but more importantly I learned about the Oxybelis aeneus snake, that that this little (long..) guy is non-harmful to humans. 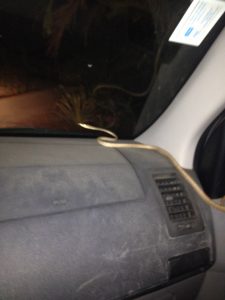 Day 5. I have adjusted so easily that I woke up at the crack of dawn around 5:00 and hiked the Piro river by my house until 8:00, just in time to go to work…This hike was particularly calm, and I managed to snap some pictures of birds. I saw a striking Cherries Tanager and a large flock of Ibis. Another productive morning. 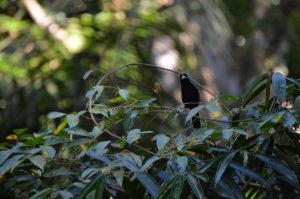 Just a Cherrie’s tanager (Ramphocelus costaricensis), minding his own business. 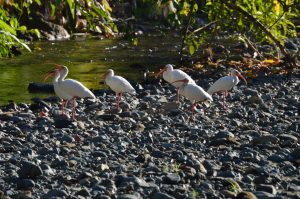 So all in all, what did I do in 1 week on the Osa Peninsula after work? I learned to ride a motorbike, sample stream sites, hiked and photographed birds, ran into a curious snake in the car, and watched a local perform fire acrobatics (whoops I forgot to mention that didn’t I? It was pretty amazing). Definitely an eventful week, I’d say…

But now the real work begins, and as I prepare for all the groups and events, I also have a rather large smile on my face knowing that every day will be full of new adventures and, well, isn’t that’s what life is all about?