Posted at 19:11h in Uncategorized by Intern Osa Conservation 0 Comments

Working as a research field assistant (RFA) for the Sea Turtle Conservation Program with Osa Conservation is really different from the other places I have worked for, and so far, it has been really rewarding.

Every day, we conduct morning patrols to register any activity from the previous night and relocate nests that are at risk to the hatchery. I wake up between 3:45 and 5:00 a.m. depending on which beach I am going to patrol and on the presence of groups. At first, it was a bit hard to get used to the rhythm, heat, and humidity, but now that it’s been a month and a half, I only see the bright side of this job.

Every day is different; the diversity and abundance of fauna on the Osa peninsula is amazing and surprising, not to mention the breathtaking sunsets. When it comes to releasing baby sea turtles and protecting them from predators, it is the best reward I could get and I wouldn’t trade it for anything. Moreover, it is really satisfying to be able to share our experience and knowledge with groups and volunteers, spreading awareness about sea turtles’ status.

It is also really interesting to work with Osa Conservation due to its diversity of projects and conservation programs. 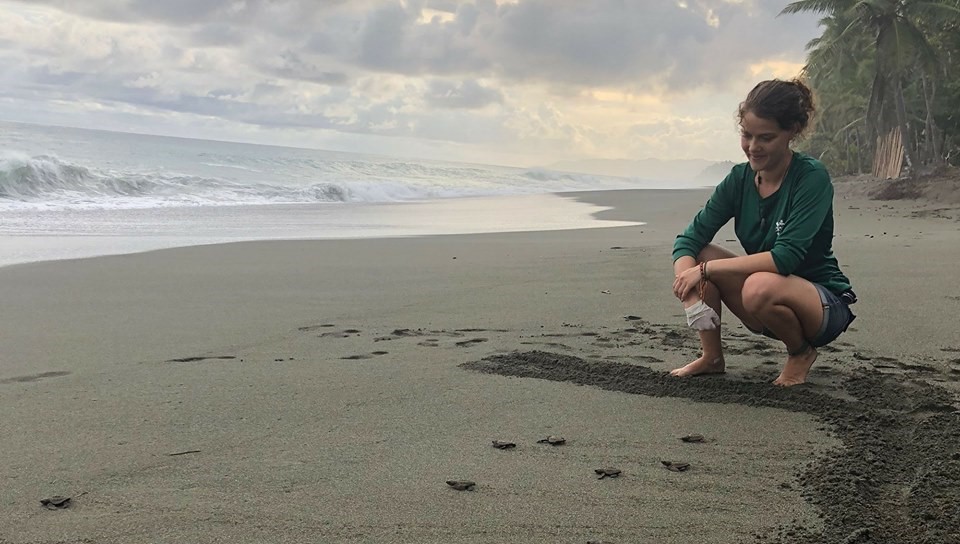 The Importance of the Work

Six days a week, I wake up around 4:00 a.m., get dressed, slip on my rubber boots, turn on my headlamp, and begin the day with a hike through the jungle to one of two beaches that the research field assistants (RFAs) patrol. Along the way, I am greeted by the sounds of frogs’ mating calls, howler monkeys’ gravelly morning bellows, and bats swooping in and out of my vision.

When my co-RFAs and I reach the beach, we begin the patrol looking for sea turtle nests laid the night before. If we find nests in a vulnerable location, we’ll open the nest, delicately extract all 60-130 eggs, and move them to a walled off hatchery where they will be protected from the tide and predators. When the patrol finishes a few hours later, I’ll hike back through the jungle to the Biological Station for breakfast with the other researchers living at the station, praying that today is pancake day.

Though the ability to participate in sea turtle conservation is a reward in and of itself, the surprises and differences between each day are what make the work truly special. It could be a sunrise that fills the sky with colors, a miniature blue jellyfish that has washed up on shore, or a sea turtle making a nest in the sand for a new hatchery we haven’t started using yet. The holy grail are the days when we enter the hatchery and, after opening the mesh net that covers each nest, we see a teeming mass of newly hatched sea turtles, full of energy and eager to get to the ocean.

Of course, there are also the days when we get to the beach and find mostly empty nests, either poached by humans or dug up and eaten by dogs or coatis, or we find the whole beach littered with garbage that has floated across the ocean from countries as far away as China. But these are the kind of daily experiences that remind me why conservation is such an important field right now, and why we all need to constantly strive to be more responsible consumers. 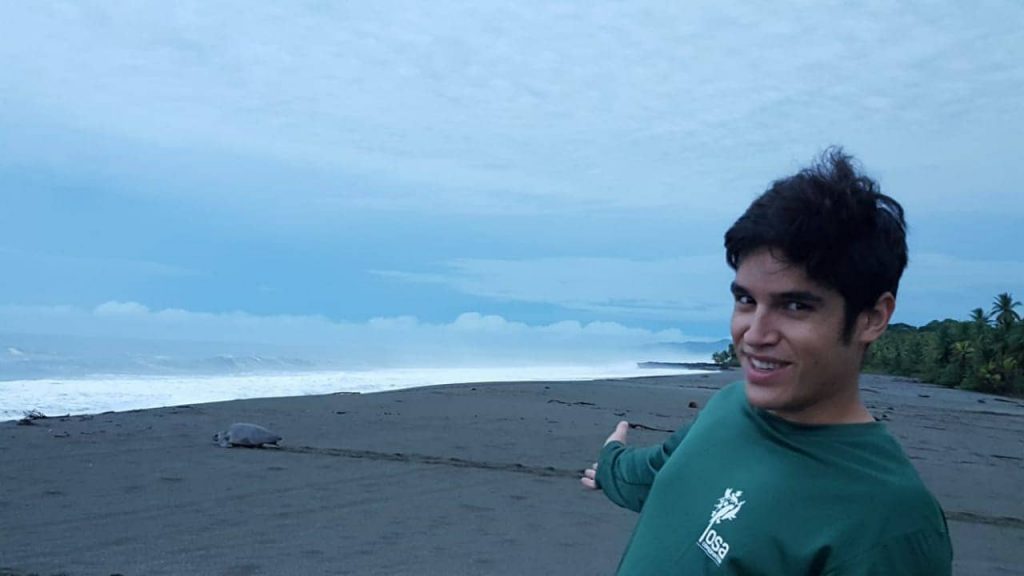 RFA Bryan with an olive ridley going back to the sea after nesting at Piro Beach.

Self-discovery in the Osa

My time as a Sea Turtle RFA has been an intense experience—rewarding and challenging at the same time.

Waking up every morning between 3:30 and 4:30 and hiking straight to the beach for the morning patrol before breakfast is quite a change of lifestyle, especially for a “night owl” like me who is used to going to bed late, getting up late, and can’t start the day without a cup of coffee.

We start the day with a hike through the still, dark rainforest and arrive to one of the beautiful and wild beaches we patrol. Watching the sunrise with this breathtaking view while patrolling the beach for sea turtle nests makes waking up so early more than worth it. During morning patrol, we relocate nests from critical spots to our hatchery, triangulate nests in non-critical parts of the beach, check predated nests, and hope to find nests hatched the night before in order to enjoy the best part of the job: releasing baby sea turtles into the wide ocean.

After morning patrol, we head to the Biological Station for breakfast. The rest of the day we work on the database or on our own projects. In the afternoon, we check if any nests have hatched, and if the season and weather allow, we go on a night patrol to look for females nesting. In the late afternoon we usually have time to enjoy this incredible place and hike at one of the various trails, spot animals, go to the beautiful Laguna (Kalman included) and the beaches, or just rest in a hammock and read a book. Every day is different!

A great thing here is definitely the community. There are many young researchers, assistants, farmers and kitchen staff living near each other in various houses and camping platforms. At lunchtime and in the evening it’s a great chance to spend time with very different people from countries all over the world.

I came here because I was looking for a life more connected to nature and to become a part of protecting the two ecosystems I love most, and which are, in my opinion, the most important to protect: the rainforest and the ocean. So, I started living the life I dreamed of here, although I really wasn’t expecting it to be so challenging. Arriving from cold Germany just three days before starting my position here, it took quite a while to get this European used to living and working in the jungle.

While becoming friends with my new roommates, cockroaches, ants, wasps, toads, geckos, a tarantula and fungus, worked out very well, the heat, humidity, and getting sick at the beginning really gave me a rough start. But by hiking, sitting in the middle of the rainforest and at these wild beaches, taking in the incredible biodiversity of giant trees, various frogs, monkeys, birds, and of course, sea turtles, and listening to the sound of the jungle and the waves of the Pacific Ocean gave me so much energy and peace that after a while I felt fitter than before and learned to adapt to everything.

This place has taught me a lot about nature and conservation as well as about myself. Seeing how many threats a sea turtle has to face during her lifetime—from the risk of rising sea levels, the exhausting first trip to the ocean, and predators and poachers, to the the dangers in the giant ocean—and knowing only one in a thousand survives, showed me how important our work is here. I am really happy that I am able to contribute to this hard work. Now, after two months, I can’t imagine a life without walking back at night through the rainforest in the moonlight surrounded by lightning bugs, crossing a river to get to my mosquito-net-sheltered bed, listening to the tropical rain while falling asleep and starting the day early with the sounds of the Howler Monkeys and a hike, all before having a coffee.