26 Dec Restoration: when conservation is not enough.

Posted at 18:35h in Uncategorized by Osa Conservation 0 Comments

Ecological restoration is a relatively recent issue, which came to change the way we think about returning ecosystems altered by humans to the way we know as original or natural. It consists of taking a step beyond reforestation; it is about making a true evaluation of the characteristics to be established, and carry out finely planned projects. It is important to make sure that native species’ forests are generated, and to manage the efforts so that the pre-existing ecological functions are retained in the sites, either passively or actively.

Why is it important? Some evaluations of the natural regeneration process indicate that it may take decades to begin to see changes in the forest structure. Despite being the cheapest alternative, in the scenario we face of climate change and agricultural expansion, we cannot afford to choose an option only based on economic resources. What we can do is look for efficient restoration options that can be adjusted to a budget.

The key to garantee that the restoration happens in a successful way is that the projects arise from updated knowledge of how ecosystems work, and to consider what has been learned from successes and failures of other environments and other parts of the world.

At Osa Conservation we are exploring a form of restoration proposed by the renowned ecologist Daniel Janzen, in one of the few remanents of tropical dry forest, in the province of Guanacaste. He planned what can be called an accelerated ecological succession process, focused on using pioneer species (fast growing trees that grow on open spaces) with big leaves to create an environment in which other species that usually occupy a regenerating space many years after the establishment of the pioneers can grow.

Being the conditions of the Osa Peninsula drastically different from those of the tropical dry forest, and with the intention of only using native species of the area, we are exploring the potential of another pioneer species, the Balsa tree (Ochroma pyramidale), in leading the establishment of a diverse and complex forest in record time. Apart from being a pioneer, fast growing-big leaved tree, the Balsa also has a great ecological relevance, as its flowers, fruits, leaves and branches are used by many species of animals like birds and mammals. 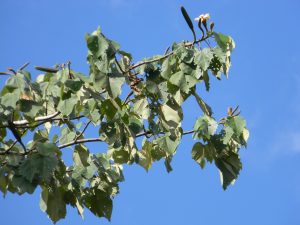 Figure 2. María José measuring the height of a tree in one of the experimental restoration plots, during the annual growth monitoring in October 2019. Photo: Hilary Brumberg.

The success of the experiment is largely due to the growth rate of the trees and the mortality we observe in each type of plot, and there will be some time before we can evaluate those variables, so we will not have solid results for the moment. However, by now we can say that we see a notable difference between natural regeneration plots and those reforested with Balsa as a pioneer species (plots with medium or high percentage of Balsa, and other species), both in mortality and in the rate of tree growth

Figure 3. On the left, a natural regeneration plot in 2017. On the right, the same plot in September 2019. Photo: Marina Garrido and María José Mata.

Figure 4. On the left, a plot with a high percentage of Balsa in 2017, when the seedlings had recently been planted. On the right, the same plot in September 2019. Photo: Marina Garrido and María José Mata.

There are still years of data to collect and analyze. We are excited to continue the process, and to be able to share the results with everyone that’s interested, including the scientific community, the decision-makers, but most importantly, those who want to make a change by restoring the habitat around them. Come visit or join our volunteer program to learn more about our project and collaborate changing the restoration paradigm in the tropics.