Tuesday, October 7th, marked the launch of Osa Conservation’s Rios Saludables de Osa program with the first of two workshops co-led by Jim Palmer, the Science and Education Director at Osa Conservation, and our partners from Stroud Water Research Center. The program is based on the involvement of community members and volunteers with the aim of creating a higher level of public awareness and involvement in response to water quality and pollution. Providing citizens with the knowledge and tools for the monitoring of their local waterways as well as encouraging partnerships between local governments and the community.

Tuesday and Wednesday’s workshop initiated the training of Osa staff in identifying key concepts and techniques for data collection and community involvement within the Osa peninsula. Day one started out with introductions and an overview of the project from which we then moved forward and got down to the nitty-gritty subject matter of the workshop. Conducting chemical tests, and collecting data on water chemistries, captivated the attention of staff and volunteers and quickly absorbed the first half of the day. 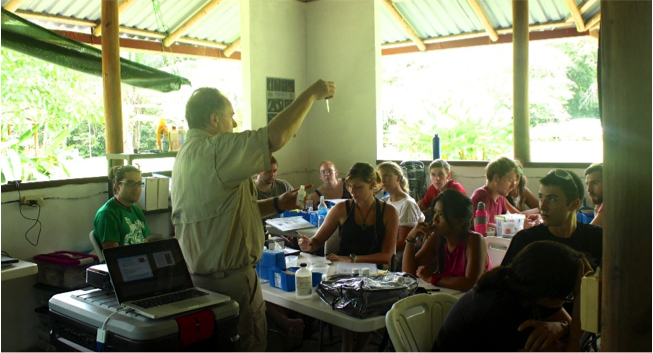 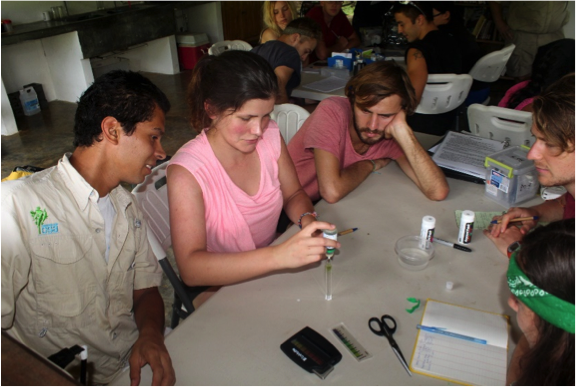 After lunch the workshop resumed, the focus however switching from chemical testing to coliform. The idea of this test is to collect baseline data for current levels of the fecal coliform, Escherichia coli, or more commonly known as, E.coli. These tests help to determine stream health and whether or not local water sources are possible hazards to human health within the community.  This knowledge can help empower community members through hands on involvement in data collection and creating a sense of place within their natural environment. 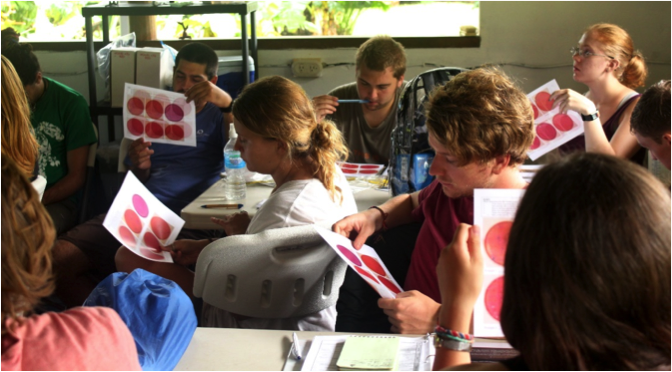 Day two, our time was spent hands-on in the Piro River learning correct techniques for placing and collecting leaf packs. These leaf packs are perfect little houses for collecting aquatic macro invertebrates, the water inhabiting insects with no backbone that are visible to the naked eye. These invertebrates are very important in determining stream health because some of these little guys are very sensitive to changes water chemistry can only persist in certain ranges of water quality. As a result, streams can be classified into categories according to its insect inhabitants. 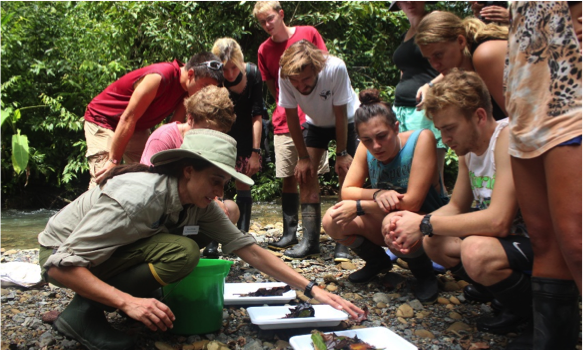 As day two came to an end it was quite hard to wrap things up, everybody loved the macro invertebrate leaf packs, because seriously, who doesn’t love an excuse to get down and dirty with insects? As the first workshop came to a close, Osa staff and other volunteers were feeling quite thrilled with the launch of the new project, and were excited to introduce it to the community members with the start of the second workshop on Friday and Saturday. 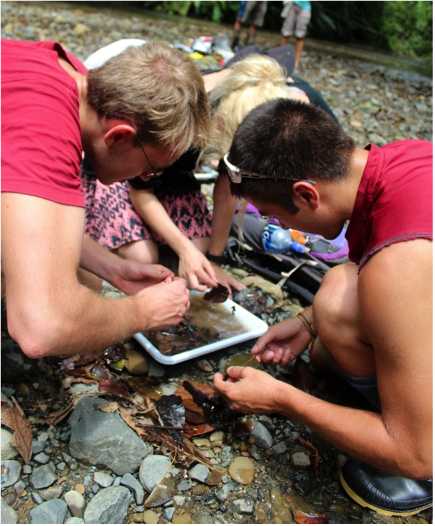 The community workshop, on October 10th and 11th, contained eleven community members from the surrounding areas such as, La Paz and Puerto Jimenez. As with day one of the staff workshop, the community workshop followed the same guidelines, introductions and reasons for the importance of the project, then straight to the hands on testing. 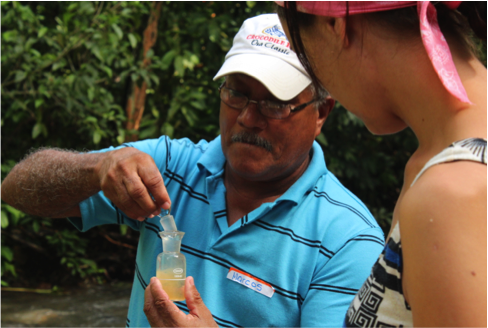 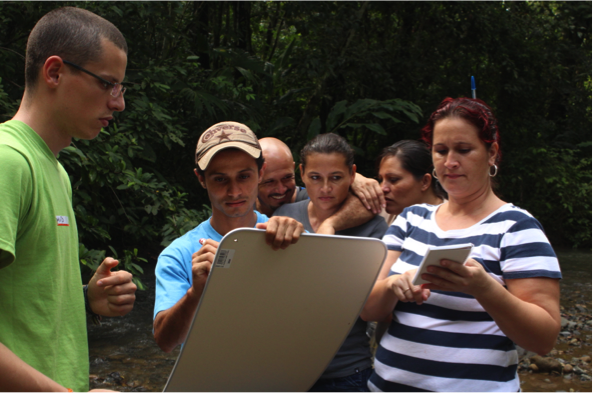 The most rewarding part of the community workshop was not only empowering the members, so that they could take water quality and stream health into their own hands and share their knowledge with other community members, but also seeing them in the field and truly being interested in work they were doing and why is mattered. Just like with the staff workshop, the second day (aquatic macro invertebrates, and leaf packs) seemed to be everyone’s favorite activity. 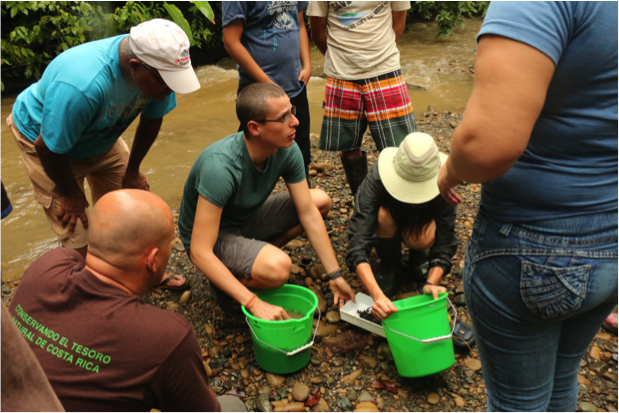 David and Tara explaining the importance of sifting leaf packs in search of aquatic macro invertebrates. Photo by, Erin Engbeck

We are very pleased that the community showed great interest in this project and would like to thank them for their participation. As part of the Rios Saludables program, we are compiling lists of schools, and other communities who are interested in participating and contributing to the program throughout the Osa peninsula. In the continuing work with surrounding communities we will be relying on them to take the lead in data collection, and hope that this empowers the community to be the first responders when water quality concerns are raised. 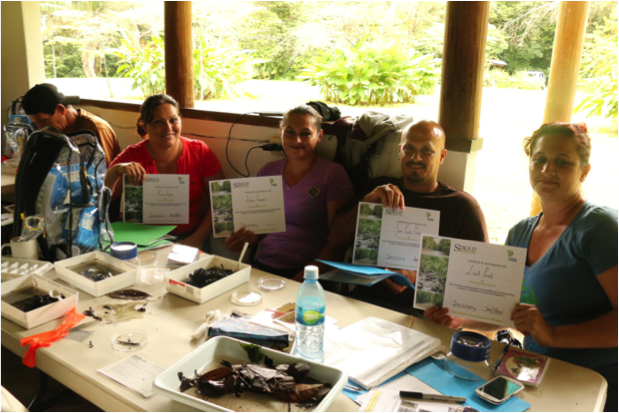 Community members proudly showing off their certificates for successfully completing the workshop. Photo by, Erin Engbeck 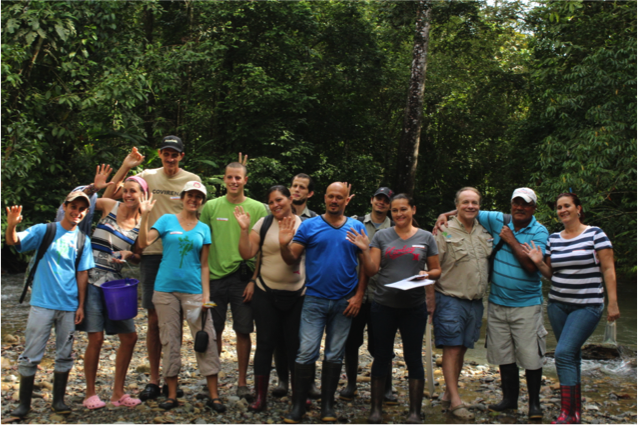