04 Apr A Round River Experience: Getting Our Boots Wet

Posted at 21:34h in Uncategorized by Melinda Housholder 0 Comments

Blogpost by Carolina May (College of William and Mary)

After returning from our backpacking trip to Osa Conservation’s Cerro Arbolito, we spent the afternoon writing up Grinnell journal entries that described all of the species and ecological observations we noticed on our hike. The rest of the week we continued with field projects around the biological station. On early Wednesday morning, we went with Manuel, Osa Conservation‘s sea turtle research coordinator, to survey the beaches for turtle nests. Once we reached the beach, we turned our headlamps off or onto red light, so as not to disturb any nesting turtles. We were instantly amazed at the number and brightness of the stars over the ocean. After walking a ways up the beach, we found the tracks and nest of a green turtle that had laid eggs during the night. We also stopped by Osa Conservation’s hatchery, where the turtle researchers relocate nests that are in danger of predation or flooding on the beach in order to increase the odds of survival. As the sun rose, we returned to camp for coffee and breakfast. 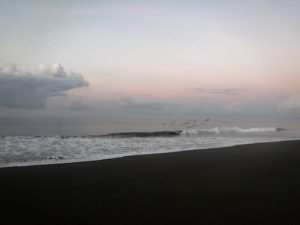 For our last few days, we continued doing surveys of river otters on the Piro River, starting at the mouth of the river that meets the Pacific Ocean and working our way up towards the headwaters. While we didn’t see any otters during our surveys, we found plenty of tracks and scat, some of which were very fresh. We also saw an exciting variety of insects, birds, lizards, mammals, and plants along the banks of the Piro River while walking to survey points. On Friday, we spent the full day on the river finishing up otter surveys. In the afternoon we discovered a small waterfall and swimming hole just in time for a much needed swimming break before reaching our surveying goal of 6 km upstream of the mouth. 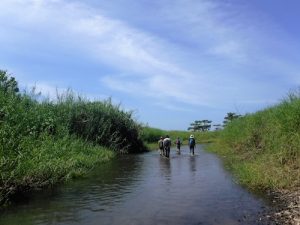 Photo 2: Otters near the mouth of the Piro River 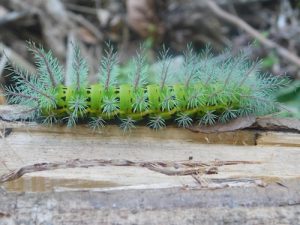 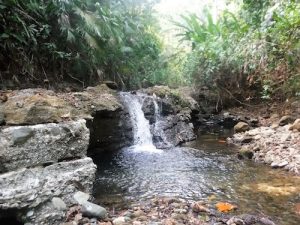 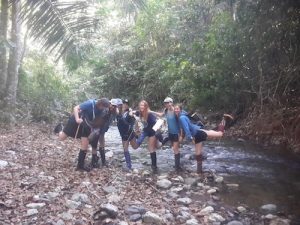 Photo 5: Emptying boots of water after a day of otter surveys. (Photo by Chris Smith)

On Saturday we packed up camp to prepare to leave the biological station for a few weeks in order to visit other research destinations. Later that day we attended a local fiesta and spent the evening learning to dance and meeting with local community members, Osa Conservation staff, and some students from another program further up the peninsula. On Sunday morning, we hopped on the early colectivo with all of our bags and boxes and headed into Puerto Jiménez.

We walked to the beach, went grocery shopping, and had smoothies, pizzas, and salads at one of our favorite restaurants: “Pizza Mail.it.” On Monday morning we gathered up all of our things and got on a bus to Rincon, our next destination. The bus driver dropped us off at Osa Conservation’s Yellow-Billed Cotinga Reserve, where there was a small house beside the road that we would call home for the next week. 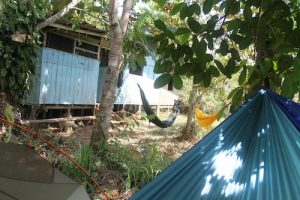 Photo 6: Hammocks outside our house at Rincon. (Photo by Katie Goodwin)

The house at Rincon had been recently flooded by a hurricane last fall, so it took us several hours of scraping and sweeping to remove the layer of hardened mud from the floors. But it quickly started looking homey once we began to set up our things inside. Chris built us a bench outside of the house and used an old door to create a kitchen table. We put up our tents and hammocks in the yard, but used the house for cooking, eating meals, and having class. 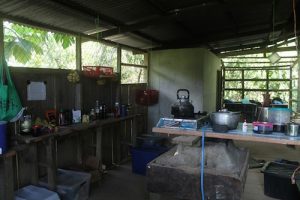 We came to Rincon to study the endangered Yellow-Billed Cotinga, an all-white, silent bird that lives in the coastal mangroves and adjacent forest. Limited previous research estimates that there are between 250-999 of these birds left, so learning more about cotinga populations and habitat is important to inform conservation efforts. Cotingas also display an interesting behavior during mating season called lekking. During a lekking event, males will gather on a prominent mangrove tree at dawn and swoop down as part of their mating display. Our goal with cotinga research was to use these lekking events as an opportunity to observe and count male cotingas.

We soon discovered that lekking season came unusually early for cotingas this year, and while we did observe several single males engaging in swooping behavior, we didn’t see large groups of males lekking in the mangroves. Instead of gathering lekking data, we began counting cotingas as they flew from the mangroves to the inland forest to forage. Part of our surveys were done by having a group standing on the bridge that stretches across the Rincon River and counting the contingas that flew by. The rest of us surveyed the mangroves by kayaking through channels and searching for perched or flying cotingas. We recorded observations on behavior, time observed, and GPS locations of sightings. 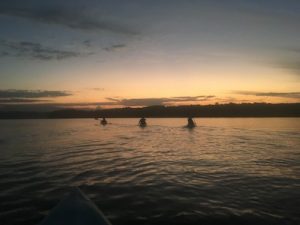 Photo 8: Kayaking to the mangroves at dawn to start Cotinga surveys. (Photo by Eli Brunner)

Over the course of our week at Rincon, we began to notice patterns in nature’s schedule that repeated each day. The cotingas would begin flying from the mangroves and into the inland forest just after 6:30 AM. At 4:00 PM a small grey and black lizard would climb up the roots of the tree by our house and begin flicking its tail back and forth, and just before 4:45 PM a flock of parakeets would fly overhead. Then just at dusk, the array of resident spiders of various sizes would take their places in the grass until they disappeared again just before dawn. We only have class for an hour or two each day, but we’re learning and observing nature from the time we wake up to the time we go to bed.

We said goodbye to the cotingas and mangroves on Friday and headed up the peninsula a bit farther to another Osa Conservation field station at Lomas de Sierpe. Upon arriving at our new field camp, we were greeted by running water and the much missed luxury of refrigeration. Here we will be staying a week to continue surveying for otters and start a new project studying five birds of concern. While the Cotinga Reserve at Rincon was one of the more rustic places we have stayed, the spectacular diversity of plants and birds we saw while kayaking through the mangroves was an unforgettable experience. 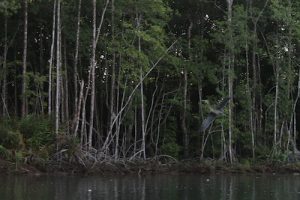 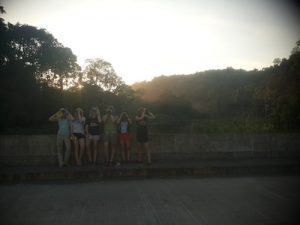 Photo 10: Sunset bird-watching on the bridge. (Photo by Chris Smith)

This blog can also be found at: http://roundriver.org/student-blog/getting-our-boots-wet/

Osa Conservation is thrilled to partner with Round River’s program in Costa Rica.