27 Mar A Round River Experience: Welcome to Costa Rica

Posted at 21:34h in Uncategorized by projects 0 Comments

The semester is getting under way here in Costa Rica! It has been about a week and a half since we got here but I think we all agree that our campsite at Osa Conservation’s biological station  already feels like home. Really, we’ve only been here for a week, since the first few days of the program were spent in San José.

We spent three nights after we arrived staying in a hotel near downtown San José. We woke up on the first morning and had what I think we can all agree was the best hotel breakfast of our lives, which included copious amounts of fresh fruit as well as pastries and a fresh omelet bar. After this delicious introduction to Costa Rica, we had a morning of orientation, before setting out to find lunch and explore the city. After walking through parks and crowded downtown streets, we entered a huge indoor market with tons of stores selling everything from fresh fruit to musical instruments. We ate lunch at a restaurant near the center of the market and bought unusual varieties of fruits to try from one of the stands. We ate maracuya (passionfruit), raw cacao beans, and fresh mangoes that night while continuing our orientation and having our first lectures. 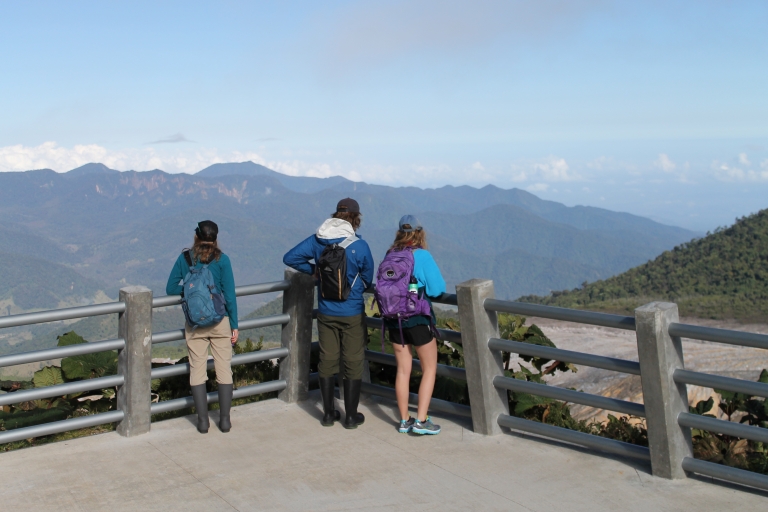 The next day we got up bright and early and headed to Poás Volcano National Park. Poás was our first opportunity to experience up close some of the natural beauty that Costa Rica has to offer. It was the first national park established in Costa Rica, and is also one of the most visited. We got there early before the crowds and enjoyed unobstructed views of the beautiful volcanic crater and lagoon. This was also our first to chance to practice Costa Rican plant and bird identification. A couple of former Round River students, who are now botanists, joined us on our journey because they were looking for a rare fern. I don’t think I have ever seen anyone as excited about ferns as our botanist companions, and I definitely have never learned so much about fern ecology in one day!

The next day, it was time to make the long journey to our home for the next three months on the Osa Peninsula. After an eight hour bus ride through varying landscapes, we arrived in Puerto Jiménez. The next leg of our journey, the following morning, was taking public transportation in the form of a colectivo (bus) to the research station run by Round River’s local partner Osa Conservation. This research station hosts volunteers, students, and visiting researchers year round. Our campsite is just a short walk from the main driveway of the station, set a little ways back from the road. We have a tent platform and a kitchen platform with a dining room table and support poles that are perfect for setting up hammocks across, which instructors Eli and Chris did before we got there.

After setting up our tents and organizing our kitchen, we set out on a natural history walk down one of Osa Conservation’s trails to experience the biodiversity of the Osa. As we walked, scarlet macaws flew overhead and toucan calls could be heard from the forest around us. A rustling in the trees above us turned out to be a small group of spider monkeys, which looked down at us with curious eyes before continuing on their way. We saw leaf cutter ant trails crisscrossing the forest floor and learned about how they use piles of leaf pieces to grow the fungus that they eat. The diversity of plants and animals was more intense than we could have imagined, and we spent so much time looking at birds that our two hour long walk only took us half a kilometer or so down the trail. 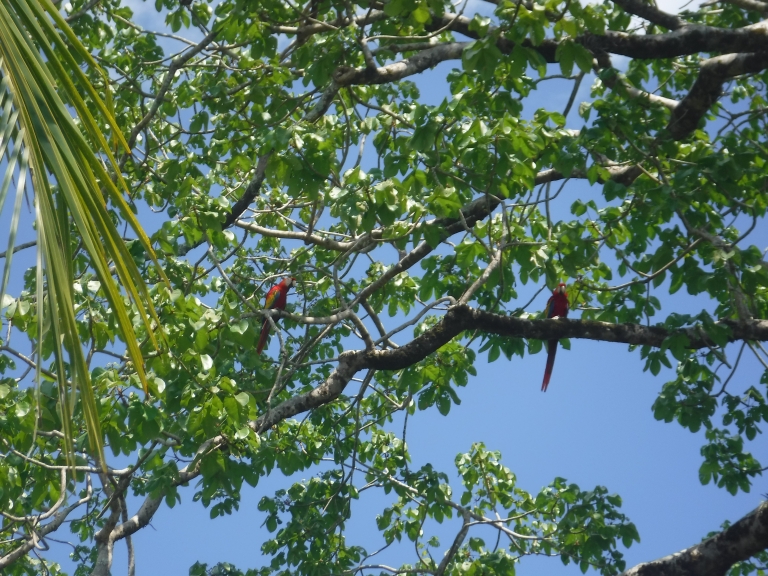 A pair of scarlet macaws perched in a tree above us. Photo by Carolina May.

During our first week here, we surveyed the Cayunda River for signs of the endangered neotropical river otter, which turned out to be the perfect thing to be doing on a hot humid tropical day. We waded down the cool stream measuring habitat features and their use by the otters, while also seeing lots of cool wildlife- like nesting hummingbirds and basilisk lizards that would run across the water to hide on the bank as we approached. Of course, there was also time for swimming in some of the deeper pools when we stopped for lunch or to cool off at the end of the day. 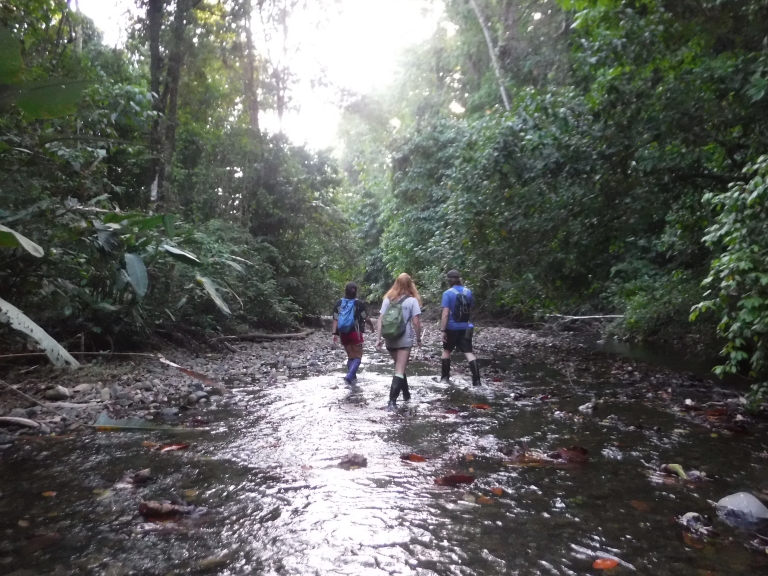 Walking the trails around the the biological research station.

One morning, we went to help out at Finca Osa Verde, the sustainable agriculture project run by Osa Conservation. At this finca, the goal is to be entirely self-sufficient and grow organic and sustainable food. After a tour of the farm, we helped plant a few rows of corn, beans, and garlic. We also drank coconut milk and ate the meat of fresh coconuts from the farm to cool us off as the day got hotter. 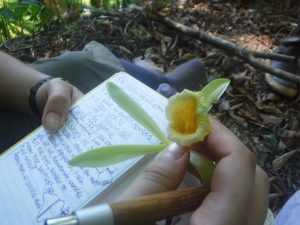 Taking notes on the wild vanilla flower we found on the way to Cerro Arbolito. Photo by Carolina May.

At the end of the week was our short backpacking trip to the old town of Cerro Arbolito to set up camera traps. The site is at the top of a small mountain at the tip of the Osa Peninsula. It was abandoned years ago but the old roads and paths are now used by wildlife and provided us a lot of open areas to set up the cameras. On the hike up we saw and learned about plants that we hadn’t seen before, including the sacred Ceiba tree, whose branches are said to transcend the worlds, and the wild vanilla orchid. The top of the mountain provided views of the Golfo Dulce and the Pacific, as well as glimpses of Corcovado National Park and Panama. We will be going back up to Cerro Arbolito in a few weeks to collect the cameras, and hopefully find photos of some cool wildlife on them!