Posted at 16:17h in Sea Turtles by projects 0 Comments

2013 turtle season is off to a great start for Osa Conservation! Our staff and volunteers are extremely attentive and excited. On Wednesday, February 13th, while out on their morning patrol, volunteers from our sister organization, Frontier, were pleasantly surprised to find the trail and nest of a leatherback turtle (Dermochelys coreacea) on the Pejeperro beach. Although historically leatherbacks were naturally found across a great many locations, they are currently the most in danger of extinction of all the species of sea turtles (CITES), and the beaches of the Osa are no exception. In the 2012 season, there was not one confirmed Leatherback nest, and in the past few years only a few individuals of this species have been observed on the coasts of the Osa Peninsula.

So far this year tens of green sea turtles (Chelonia Mydas Agazzisi ) and Olive Ridley sea turtles (Lepidochelis Olivacea) from the Pacific have visited our beaches and have kept our staff sufficiently occupied. Our sea turtle volunteer season begins in July; however, we are already in the recruitment period for new field assistants for the 2013 season. If you are interested in being one of these assistants or in coming for a few weeks to volunteer, please contact our volunteer coordinator Hansel Herrera, [email protected], and become part of this great effort to protect the sea turtles of the Osa Peninsula. 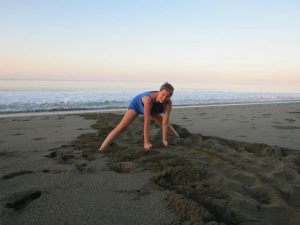