06 Jun Why the Osa is Impossible to Forget

Posted at 20:43h in Uncategorized by InternUser Osa Conservation 0 Comments

Hi, my name is Bob Baker. For the past 10 years, my wife Lindsay and I have come to the Osa Peninsula for two weeks every March. We come to enjoy what National Geographic calls the “most biologically intense place on earth.” We typically stay in vacation rentals in the Cabo Matapalo area which is about 18km south of Puerto Jimenez at the tip of the peninsula. Last March (2016), we arranged to visit Osa Conservation’s biological station and during our visit,  Manuel Sanchez (Sea Turtle Program Coordinator) asked if we would like to join him on a sea turtle beach patrol one evening. Joining Manuel, and rescuing and releasing 17 baby Green sea turtles to the ocean was such an amazing experience that I decided to become a sea turtle volunteer with the program again this past March for a week. 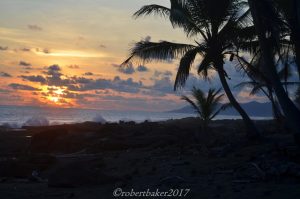 On the first day, we met for an orientation session and learned that our duties would begin at 5:00am the next morning when Manuel, our supervisor, would meet us at the dining station. From there we started our hike to Piro beach and began our first sea turtle patrol.

Beach patrols as a sea turtle volunteer involve walking, paying attention and more walking. Manuel taught us that there are primarily 2 species of sea turtles that visit this beach, as well as Pejeperro beach, for nesting purposes. These are the Olive Ridley (Lepidochelys olivacea) and the Green sea turtle (Chelonia mydas). Leatherback sea turtles (Dermochelys coriacea) and Hawksbill sea turtles (Eretmochelys imbricata) also occasionally visit these beaches. We even got to see a Leatherback nest during our stint. Manuel taught us about the different species and how to identify them. For example, Olive Ridley sea turtles leave asymmetrical, or alternating, tracks. On the other hand, Green turtles leave wider, symmetrical tracks due to their size. 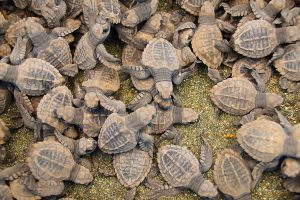 On this first morning, we recovered approximately 100 Green sea turtle eggs and carried them to the hatchery. The hatchery is a covered area within the vegetation just off the beach. Careful to maintain the same dimensions as the original nest, we dug a hole in the hatchery compound placed the eggs in the new “nest,” We then removed about 25 Green sea turtle hatchlings from another nest and watched them make their small journey to the waiting ocean. Fantastic!

The next morning, we were up at 3:30am to patrol the longer Pejeperro beach. We found Green and Olive Ridley tracks and a few new nests. We did not remove the eggs  from their nests on this beach due to lesser rates of poaching and predation. 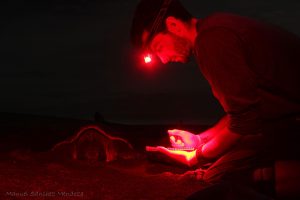 During my week as a sea turtle volunteer, I saw other wildlife including Fiery-Billed aracaris, baby Green iguanas, a Red-eyed tree frog, Yellow-headed caracaras, Squirrel monkeys and a Common potoo. Although we did not see them, we used our skills to determine that other species were nearby.  Manuel, Delaney and I hiked to a camera trap and found an amazing photo of a jaguar. This jaguar had been in front of this camera the previous evening. Manuel was so excited because it was the second jaguar they had seen and documented recently. We also encountered Puma “scratchings” on the trail to the camera trap location. 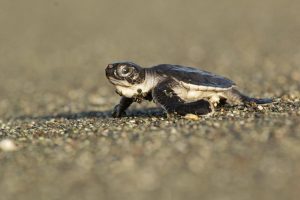 Later in the week, alone on the Ajo trail I came upon a herd of approximately 50 White-lipped peccaries. At first, I thought they were the more common Collared peccaries. However,  Osa Conservation’s Andy Whitworth later corrected me and explained that Collared Peccaries travel in small groups (usually no more than 10-20). White-lipped Peccaries travel in herds from anywhere between 50-300 individuals.  After showing Manuel my photos he confirmed they were of the white-lipped variety. The abundance of peccaries, one of the jaguar’s natural prey, further explain the jaguar in the vicinity. 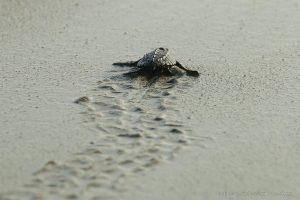 On my last full day, I went out on 2 patrols (Piro at 3:30am and Pejeperro at 8pm), transferred 137 Olive Ridley eggs to the hatchery, hiked the Ajo and Tangara trails, visited 2 camera traps and  hiked to the Sunset rocks to watch another beautiful Pacific Ocean sunset. The next morning, I went on my last sea turtle patrol with Manuel and Marina (a new research assistant). Tired from the night before, we doggedly walked the beach. We ended up transferring 93 Olive Ridley eggs to the hatchery, a great way to end my sea turtle volunteer experience. A big thanks to Manuel, Alejandra, Karla, Rachael and Andy for their support and making this a wonderful life experience. Cheers!