Posted at 17:56h in Uncategorized by projects 0 Comments

Osa Conservation’s Yellow-Billed Cotinga (Carpodectes antoniae) Sactuary is a special place born from the inspiration of a two-year monitoring and tracking program. After the hard work performed by fellow researchers, the only logical process that seemed to follow was for us to create a stronghold for this struggling, endemic bird – Today this little stronghold is the place where OC studies the local population of this endangered bird.

The Sanctuary is located in the heart of one of the most significant bird corridors known as the Mangrove-Premontane tropical rainforest ecotone. According to Reinaldo Aguilar, a renowned dendrologist from the Osa Peninsula, this environment is, “an exceptional grove.” Here you can find an impressive forest network that, quite suddenly, stops immediately, giving span to the mangroves – the juxtaposition of these two biomes result in the presence of very unique, and rare trees from both ecosystems. 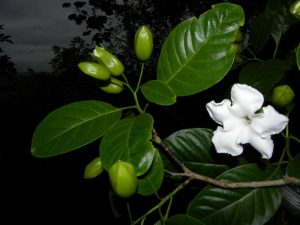 On June 25th we were patrolling the YBC Sanctuary and taking photos of some of the trees in the area – we shared these photos with many of our nature enthusiast friends on the Peninsula, and to our surprised were contacted by a very excited Reinaldo Aguilar. His news? That the tree we had snapped photos of was an endemic Costa Rican species with an incredibly restricted range of growth within the peninsula. Aguilar identified the species as Bourreria grandicalyx, commonly referred to as the J.S. Mill & Sirot, a name given in tribute to the men who published the first descriptor of this tree in 1997. This species belongs to the borage tree family, known as Boraginace, and as of 2007 there were only 30 known species recorded within the genus. Aguilar also told us that only eight unique, individual samples of this tree are currently kept at our National Museum, with two of the samples belonging to trees he had encountered personally, but that he believes are no longer alive today.

All in all these findings prove that Osa Conservation is heading in the right direction with it’s mission to protect endemic corridors on the peninsula through methodology based on scientific evidence and local expert assistance – It is a win-win situation towards the goals of conserving Costa Rica’s natural treasures.