Posted at 13:09h in Aves, Birds by Osa Conservation 0 Comments

The Yellow-billed Cotinga (Carpodectes antoniae) is a regional endemic bird that occurs on the Pacific lowlands of southern Costa Rica and Northern Panama. This species is listed as Endangered (EN) by IUCN’s red list, and its small population, estimated at only 298 to 794 individuals, is thought to be declining rapidly. In the past years, Osa Conservation has led efforts to study this species and its habitat needs to conserve one of Osa Peninsula’s most unique treasures.

Observations of Yellow-billed Cotinga at several locations indicate that it requires access to mature fruits from Lauraceae, Annonaceae, Moraceae and other mixed forest tree species. Recent work by Osa Conservation has documented movement between mangrove and premontane tropical habitats during their suspected breeding season (December to June); however, spatial parameters of home range size and habitat use, and patterns of movements between breeding, feeding and roosting areas remain unknown. Few observations of Yellow-billed Cotingas exist within mangrove habitat during months the birds are thought to be non-breeding, which has lead researchers to believe that the species migrates or “wanders” locally or possibly attitudinally between July and November, but this has never been confirmed. Individuals have been observed at two inland sites on the Osa Peninsula several kilometers away from typical mangrove habitats between the months of September and November, but the breeding status and origin of these birds with respect to their reproductive grounds and their migratory movements is unknown.

The gaps in the natural history of the Yellow-billed Cotinga are slowly filled to technology and birdwatchers sharing their sightings as part of a big citizen-science network. The Yellow-billled Cotinga has been reported in new sightings throughout the Peninsula, specifically at the Osa Wildlife Refuge; nevertheless these sightings are still incredibly scarce and often have a large time-lapse between them. Cornell Lab of Ornithology’s eBird online platform last reported a sighting at the Lapa Rios’ property in 2011 (see map attached). 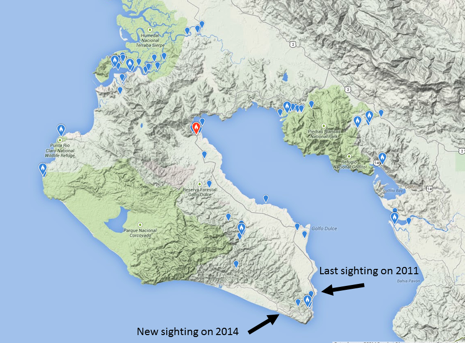 Osa Conservation’s naturalist Manuel Sanchez Mendoza along with his brother and niece, Elfer Daniel Sanchez Mendoza and Jennifer Robles Sanchez, have been observing Turquoise Cotingas (Cotinga ridgwayi) at his house backyard (neighboring OC’s Piro Biological Station) foraging on “Aguacatillo” Trees (Lauracea family) for several days when on August 17th to his surprise, an adult male Yellow-billed Cotinga was with the group of birds feeding on that tree. This is a truly amazing report after three years of “silence” (picture attached). 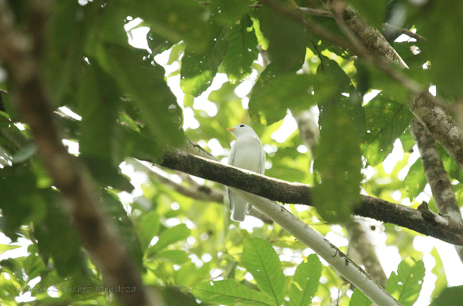 This photo was taken by Manuel Sanchez at his home while observing Turquoise Cotinga’s with his family.