Posted at 21:51h in Uncategorized by Intern Osa Conservation 0 Comments

Blog by Danielle Connor, Undergraduate Student at University of Exeter

Earlier this year, I spent many hours following the endangered spider monkey in the Osa. As part of a new project being carried out by Osa Conservation and my own research with the University of Exeter, I looked for sleeping sites and latrines to better understand the ecological role of spider monkeys in seed dispersal and their potential to regenerate rainforests. 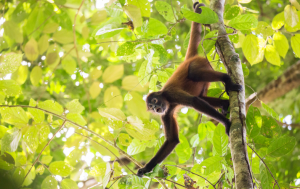 A spider monkey hangs from a tree

Spider monkeys live in fission-fusion societies that split into smaller subgroups and fuse into large subgroups. At night, spider monkeys use specific “latrine sites” to excrete at key sleeping trees. These latrines are communal toilets and provide a perfect location for us researchers to examine how the rich fruit diet of spider monkeys are impacting the plant community. 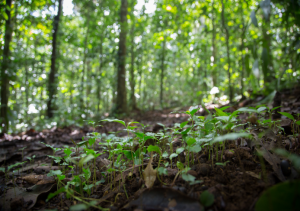 A spider monkey latrine, indicated by the consolidated saplings

During my research, I successfully found 41 sleeping trees and 30 latrine sites. The sleeping trees were mostly large trees with long lateral branches, but some spider monkeys also slept in very small trees. Latrines were composed of many young tree saplings, excreted seeds and poo! I also found they consumed 32 species of fruit as well as other foods, such as epiphyte leaves that they feed on to add protein to their diet. 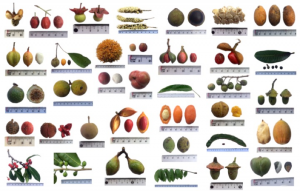 If you missed our previous video blog about this project, please check it out here to learn more!