30 Nov Stick Insects in the Osa

Posted at 21:58h in Science and Research by InternUser Osa Conservation 0 Comments 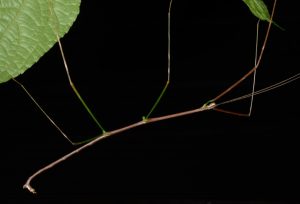 In early November 2015 we traveled to Osa in order to research the stick insect fauna of the Peninsula. It was due to the kindness of Max Villalobos, the Operations Manager of Osa Conservation, that we were allowed to search and collect in the Osa Conservation area.

Stick Insects (Phasmatodea) can be found in Costa Rica with 3000 species currently known in the tropics around the world.  They are herbivores and well-known for resembling twigs or branches. Therefore, they have great camouflage.  Brightly colored and well-flying winged insects also can be classified as Stick Insects. Stick Insects represent the world’s longest known insects, the largest of all being a Bornean species that measures 56.7 cm from the tips of the fore-legs to the tip of the abdomen. Some 60 species have so far been reported from Costa Rica, but the actual number of species occurring throughout the country is estimated to be much higher. 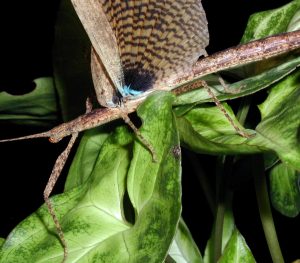 Due to their good camouflage Stick Insects are most easily found during the night by searching the lower vegetation with torch lights. This method makes the insects easy to spot and often good numbers can be found with rich and diverse low vegetation throughout most of Costa Rica. Rainfalls during the afternoon or early evening usually increase the number of specimens encountered. Most species are night-active and start feeding shortly after dawn.

While only on Osa for eight days we have unfortunately chosen a fairly bad time. The strong El Niño in 2015 has caused a massive decrease of rainfalls in this particular area during the past months and our observations right away showed low numbers of insects. Only few specimens were seen, which was very disappointing for our studies. Almost all of the species observed were common ones, that also occur in other regions of Costa Rica. The most abundant species in the Osa Conservation area were the orange-winged Pseudophasma unicolor and the slender, wingless Calynda coronata. 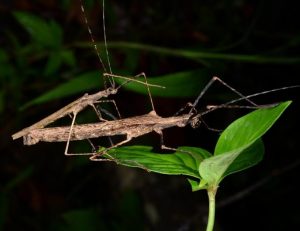 Most of Osa Peninsula and the area of Osa Conservation represent perfect habitats for a diverse stick insect fauna and – mostly based on museum specimens – we know that there are many other species on Osa, but which we were not able to find. The very low abundance of these insects caused by El Niño during our stay in Osa has unfortunately not contributed much to our project, which is a forthcoming book on the stick insects of Costa Rica. Hence, we shall like to encourage all of you to look out for stick insects during your studies at Osa Conservation. Any information, records or photos are helpful and welcome. We will be very grateful for any support! Thank you!

Feel free to contact Frank and Oskar. Just have a look at: www.Phasmatodea.com