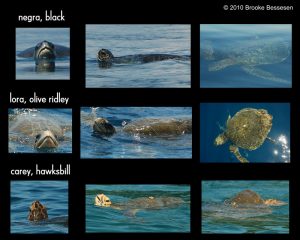 [/caption] When we began our research, nobody expected us to find very many sea turtles inside Golfo Dulce — most sea turtle activity was thought to occur on the Pacific side of the Osa Peninsula. It turned out that chelonids were the most frequently seen family of animals, accounting for 38 percent of our total sightings. Discovering such significant numbers of sea turtles was one of our most important findings. Sadly, fishermen with many years of experience in Golfo Dulce say the sea turtles there have declined at least 30 percent in recent years. Jorge and I documented three species: Pacific Black sea turtles, still commonly referred to as “Greens” (Chelonia mydas agassizii), Olive Ridley sea turtles (Lepidochelys olivacea) and Hawksbill sea turtles (Eretmochelys imbricata). Locals also reported seeing near-extinct Pacific Leatherback sea turtles (Dermochelys coriacea) inside Golfo Dulce. That’s four endangered species of sea turtles utilizing the embayment. Amazing! Our biseasonal data show Golfo Dulce to be a year-round feeding and breeding area for endangered Green sea turtles. We logged over a hundred sightings of them between both surveys. This species, by far the most common, was usually observed in the upper regions of the gulf resting at the sea surface. But we also documented Green sea turtles mating in all four quadrants of the inlet, so their use of the fiord waters appears widespread.
0 Comments
Continue Reading
Share
Sea Turtles / 21.10.2011

September 18th represented the 3rd Annual Sea Turtle festival on Carate Beach.  About 100 members of Carate, Puerto Jiménez, and surrounding communities participated in sea turtle discussions, presentations fun activities with the theme of conservation. The festival began with an interactive discussion with children and adults about the principal biological characteristics of the Osa, the turtle species that nest here, and the objectives and activities of the Sea Turtle Conservation Program developed by Osa Conservation on the beaches of Piro, Pejeperro and Carate. Club Ambiental Las Abejitas of the Saturnino...

Sea Turtles have been around for over 100 million years, but all over the world their survival is being threatened. Volunteers are crucial to protect the sea turtles during their nesting season. Our program conserves and protects 10 miles of sea turtle nesting beach on the Osa Peninsula—a largely untouched, and amazingly beautiful tropical rainforest located in southwestern Costa Rica. This rewarding program allows you to monitor sea turtle movements, protect hatchlings and learn about sea turtle conservation—all on some of the most incredible beaches in the world, from Matapalo to Carate. Our sea turtle program relies on volunteer support to increase our presence on these beaches and help reduce poaching pressure. Spaces are available from July through December – please visit our sea turtle volunteer page to sign up, or send this info to people you think may be interested. Volunteering is a great way to experience this unique place while giving back through valuable conservation efforts.
0 Comments
Continue Reading
Share
Science and Research, Sea Turtles / 20.10.2010

Let´s have a bad joke!

By Phoebe Edge, Research Field Assistant (RFA) , Sea Turtle Conservation Program. What turtle has the best eye sight? A SEE TURTLE! And that´s why it´s so important that we make sure on night patrols that we spot the ladies before they spot us…the last thing we want to do is scare them back to the sea. A good turtle detective just doesn´t do that. An Olive Ridley could have swum thousands of miles to get to this specific beach  which is why here at Friends of the Osa we do...

[caption id="attachment_1341" align="alignleft" width="300" caption="Riverside Wren nest by Cheryl Chip & Jim Tamarack"][/caption] For those of you who may remember, I posted a feature on the Riverside Wren (Thryothorus semibadius) back in April.  It was one of my first postings for the then new Friends of the Osa's blog The Osa Chronicles and a few of you commented on both the nature history and photography by Gianfranco Gomez. One of the species ecological behaviors I wrote about was of reproduction and nesting.  When I spoke about the nest of...