Posted at 18:32h in Science and Research by projects 0 Comments

By: Zia Mehrabi, University of Oxford.

The Osa Biodiversity Center (OBC) provided a brilliant opportunity for biological research at an accessible location bordering Corcovado National Park (CNP). CNP represents the largest remaining tract of tropical lowland forest left standing on the pacific coast of Central America. The Osa Peninsula is phytogeographically unusual with high floral species diversity of an estimated 500 species of woody plants and exhibits high primate abundances as well as being home to charismatic large felids such as puma and jaguar.  The work undertaken at the OBC during April 2010 primarily aimed to clarify insights into the microhabitat preferences of particular dung beetles (Coleoptera: Scarabaeidae: Scarabaeinae) identified in earlier study investigating the fidelity of ecological methods used for inventorying insect functional groups at Sirena Biological Station (CNP) during the months of July and August 2009.  In order to efficiently and cost effectively map diversity it is widely recognised that the use of indicator groups is necessary. The sensitivity of Dung Beetles to light, soil type, moisture, temperature, leaf litter, structural complexity, vegetative cover, and resource type are widely recognized, advocating their utility as an indicator of the influence of abiotic environmental parameters on patterns of diversity in tropical ecosystems on a global scale. In order to map spatio-temporal distributions of biological organisms it is important to measure habitat variables on the scale at which they influence the taxa studied. If the habitat is not defined from the perspective of the organism then inference made from data reporting environmental influences on distribution of populations may be inaccurate.  The material generated during the study at the OBC will be identified at the Oxford University Museum of Natural History. It is an exciting prospect that the work at OBC may back earlier work that has identified a microhabitat preference of dung beetles on trap placement, work that potentially has serious implications for sampling methodologies currently employed in comparative ecological work which  aims to report the influence of deforestation and habitat degradation on tropical biodiversity. 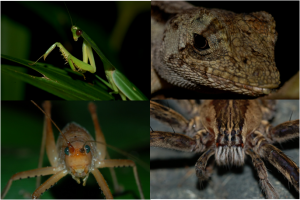 The accommodation facilities at the OBC are superb, with comfortable beds, clean running water and delicious food. Furthermore the staff are extremely friendly and helpful, facilitating communication with the local community and achievement of research objectives. In addition, accessibility from the nearby town of Puerto Jimenez and contact via satellite connection ensure ease of logistics. There is a nicely set out trail system that provides some great tracks for night walks where a plethora of insects , arachnids and reptiles may be easily observed and photographed. Overall I was very happy in the time I spent at the OBC and would recommend it to other researchers wishing to explore this interesting region of the world.