18 May The Osa Recording Project 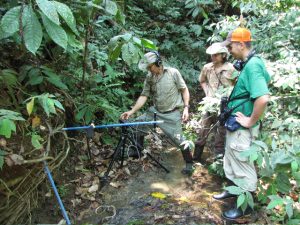 The Osa Peninsula is known for its high level of biodiversity and is one of the most “biologically intense” places on earth according to National Geographic. The Osa has over half of all species found in Costa Rica. This is evident in the over 400 bird species found here. That’s quite a few birds for such a small area. Well, its time then to make them heard; to record their songs, calls, mews, ooo’s, churrs, drumming and scolding notes and make them available for all to listen to.

That’s exactly what Jeff Woodman, board member of American Bird Conservancy and Amazon Conservation Association, Luis Vargas, ornithology student at the University of Costa Rica, and Tim Burr, recordist for more than three decades thought when they met at a recording workshop held by Cornell’s Lab of Ornithology last summer. Partnering with Friends of the Osa, The Osa Recording Project began in December 2009 when Jeff, Luis, and Tim joined Al Houghton, Bob Levy, and Bob Schallmann on the Osa Peninsula. There they met up with Liz Jones and Abraham Gallo from Bosque del Rio Tigre Lodge and Kory Kramer, Guido Saborio, and Manuel Sanchez from Friends of the Osa to begin the somewhat daunting task of recording as many bird, mammal, amphibian, and insect sounds as they could. The first trip was highly successful 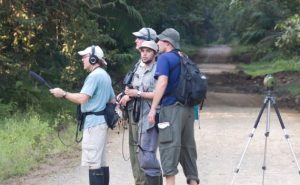 prompting the group to once again descend upon the Osa for round two in mid April. The expertise of the group expanded significantly with the addition of Costa Rican birding experts Leo Garrigues, Gary Feliz and Oscar Herrera, and with Karen Leavelle with Friends of the Osa. Now Gary, Oscar, and Karen who reside on the Osa can simply walk outside and record when they wake up in the morning!

This recording group has travelled from Luna Lodge at Carate to Friends of the Osa’s Osa Biodiversity Center, out to Cabo Matapalo and Puerto Jimenez, Bosque del Rio Tigre Lodge and everywhere in between. This group has even gone all the way over to the Rincon mangroves on the Golfo Dulce side where one can find the endangered Yellow-billed Cotinga and the Mangrove Hummingbird.

So why record all this wildlife?  Education, Education, Education. One intention is to create one or more CDs that could facilitate the training of aspiring local naturalists. Also, birders who come to the Osa can learn some songs before being inundated by the local avifauna when they get off the plane at Puerto Jimenez. Researchers and students will also benefit as well as local guides who work in this amazing environment. We also hope to have songs linked to the Friends of the Osa website along with a bit of natural history and images to allow folks to make visual connections with Osa wildlife. 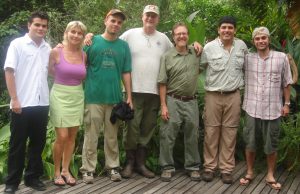 We will of course keep you updated on this amazing project and gigantic undertaking as we progress.  Look out for more blog posts showcasing a particular bird species, its ecology and the bird’s song or call in its partially edited version. Final edits will be made by recording specialist Al Houghton out of New York.