12 May The Return of the Jaguar

Posted at 18:25h in Uncategorized by Intern Osa Conservation 0 Comments

The lush and enchanted forests of Piro, Osa Conservation saw the return of their majestic King of the Jungle after two long years. 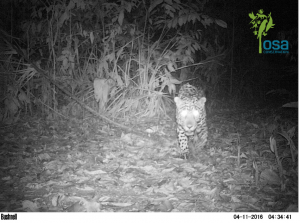 The Jaguar Is Back!

In the late hours of 23rd March 2016 the first images of this beautiful creature was captured on the camera traps on the Ajo trail. Since the last sightings of the jaguar on the camera traps here was back in 2014, his return is very exciting. Especially for the big cat programme and its researcher Tabea who ran out screaming “JAGUAR JAGUAR” when she was processing the data. With this hard evidence that the big cat was on Osa property and probably somewhere close by I suddenly had a strong desire to go hiking in the hope to witness this rare beauty of this endangered animal. So a few other volunteers and I planned numerous ‘jaguar hunts’ on most of Osa Conservation’s forest trails.

After two weeks and with more and more images capturing the jaguar on nearby trails we still had no luck finding him for ourselves. So being very unsuccessful at tracking the jaguar I decided to stop looking. I believed in the philosophy that if I stopped trying to find him, he would find me. And so with my new profound realisation, I carried on with my normal routines of morning and night sea turtle patrols.

Early last week a volunteer, Kate, and I were walking along the beach around 10pm after a rather successful turtle night patrol where Kate was able to see her first nesting Green turtle. We were still on the beach so we weren’t using our flash lights, there was only a slight glimmer of moonlight lighting up the beach ahead. Nearly 100 metres from the exit of the beach is 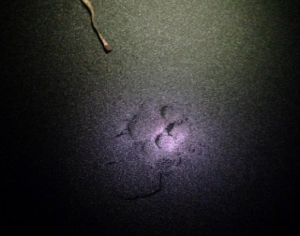 when I stopped. I noticed a large dark silhouette only five or so metres in front of me. Moving fast up from the ocean to the vegetation. I cry out to Kate “What was that?!” grabbing her arm and experiencing a weird sensation of all the hairs on my legs standing up at once. We stood in silence for a couple of seconds allowing our brains to figure out what our eyes had just witnessed, trying to conjure up different possibilities.

“It’s too big to be a dog….it is too small to be the water buffalo?”

We both turn our white lights on and scan the sand, hoping to not find anything and to accept being fools of our own imagination. Alas, we walked forward and discovered large, rounded big cat prints that had been prowling the beach ahead of us. By now all fear had disappeared or turned into pure amazement and adrenaline. Still in disbelief we thought it would be a good idea to take pictures of the prints for identification and to have as evidence of our encounter.

Once we were back at the station we were able to compare our pictures and measurements with that on the track board which gave us enough reason to believe it was the jaguar we had been searching for. Later that week we collected the images from the camera trap by the beach and we got 100% confirmation it was a jaguar that night.

Hopefully this particular jaguar will stick around for some time as it is a great sign that our forests are heathy and diverse!

It’s safe to say that my philosophy does work. If you are looking for something …Don’t look for it!