Posted at 19:52h in Miscellaneous by turtle 0 Comments

Finding solutions and alternatives for human and feline coexistence

Since mid 2006, Aída Bustamante and Ricardo Moreno, researchers of the Wildcat Conservation Program, have worked hand in hand with FOO on applied research, education and involvement with key actors (cattle ranchers, hunters, local children and youth, ecolodges, local authorities and NGOs). We recognize the need to address the livelihoods of local human populations so that they are in a better position to care about jaguars. 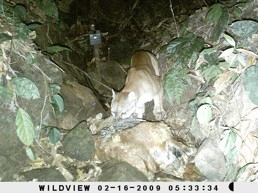 The long-term conservation of jaguars and their ecosystem will not be possible with scientific research alone.

Attacks on domestic animals by large cats have triggered retaliation; and at  least twelve jaguars have been killed in the last two years in the Osa peninsula. Hence, the Wildcat Conservation Program decided to sell T-shirts and raise funds to compensate people that have lost their animals by jaguar or puma attacks. So far, we are the only such compensation program in Central America and have paid for 16 animals up to now, including domestic pigs, sheep and calves.

Aida Bustamante and Ricardo Moreno in Panama with Dr. Hirsch

Ricardo Moreno, Dr. Ben Hirsch, Aída Bustamante and a male ocelot in Barro Colorado Island in Panama. Ricardo and Aída went to Panama to collaborate with Dr. Hirsch and Dr. Roland Kays, trying to capture ocelots and tag them with GPS radio collars to detect behavioral changes. They managed to capture two females and a juvenile male, which indicates a high capture rate for the species across its range of distribution. The idea is to use this technology in the near future in the Osa Peninsula.

Jaguars on the Osa Peninsula represent an important isolated population of this ecologically vital species. The long term survival of this local population is uncertain. One important way to help ensure their future would be the establishment of a protected biological corridor between Corcovado National Park on the peninsula and Piedras Blancas National Park on the mainland. Despite years of research and effort by an international group of environmental organizations, this wildlife corridor has not been established. An increase in land development for vacation homes is driving up land values in the lands within and around the Golfo Dulce Forest reserve, threatening Jaguar habitat.

The total number of Jaguars on the Osa is unknown. A study on Corcovado Park published in 2007 suggested through extrapolation, a density of around 30-40 individuals in the area of the park. However, a number of factors make estimation difficult.

Recently Aida responded to a supporter’s question on the number of Jaguars on the Friends of the Osa Facebook page with the following:

“It is really hard to say a “number” because there are not studies for the whole Osa Peninsula and it is not recommended to extrapolate the data, because the conditions (habitat, prey availability, poaching, etc) are very different–even in this small area. But we did a really intensive study in 2007 in the Matapalo-Corcovado area and we found 25 ocelots, 22 pumas and 4 jaguars. Sadly, people still kill them a lot (we know that at least 12 in less than 2 years), mainly when jaguars predate on livestock or domestic animals, when natural prey is scarce in the forest due to poaching.”

Since availability of food limits the population, the Osa can only support so many Jaguars. This makes the loss of the twelve animals Aida mentions a major impact on the total population. Our efforts are vital because the next several years will prove crucial to the Osa Peninsula’s Jaguars.

To support the Wildcat Conservation Project, please visit the FOO website and make a donation.