Posted at 16:17h in Volunteers and Visitors by InternUser Osa Conservation 0 Comments

Cesar Barrio-Amoros holds a PhD in biology and is a notable taxonomist, herpetologist, author, and photographer. Following his experience in the Osa, reflected below, Cesar has planned to lead a reptile and amphibian workshop at Piro Biological Station next May or June, the beginning of the wet season.

I have traveled throughout most of Latin America in search of amazing herping spectacles. In the Galapagos, I saw marine iguanas (Amblyrhynchus cristatus) and Galapagos giant tortoises (Chelonoidis nigra). I witnessed an astonishing diversity of poison frogs in Peru and made some interesting scientific discoveries on the Tepuis of Venezuela. My curiosity has now led me to one of the tiniest countries: Costa Rica. Here, the herpetological diversity is bewildering and vibrant. Due to Costa Rica’s intense biodiversity, it is not difficult for a photographer to capture nearly all of the herping species in a matter of years. 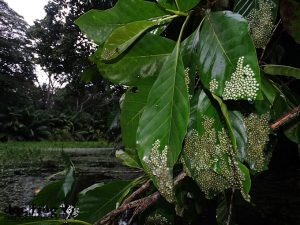 The gliding treefrog (Agalychnis spurrelli) was on the top of my herping list after learning about it on a BBC documentary. I have actually seen the individual species in the Caribbean and Pacific lowlands. However, I never saw one of those impressive reproductive aggregations where thousands of frogs gather in a pond and lay millions of eggs in just a few nights.

I was envious of the photographs my colleague, Manuel Sanchez, captured while working at Osa Conservation’s Piro Biological Station in the Osa Peninsula. I immediately scheduled a visit to see the event. When I arrived, Manuel informed me that the area was full of frogs, thousands were laying eggs in amplexus (amplectant pairs).

Around 6:00AM the next morning, we left for our journey along with herpetologist intern and researcher, Michelle Thompson. At the site, we noticed some bushes moving and, upon further investigation, realized there were a few frogs still laying eggs. The great wave was the previous night so only about 10% frogs remained. 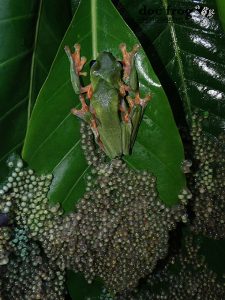 Still, it was a breathtaking sight because they were completely surrounded by millions of eggs! Michelle and I were amazed — this was quite an experience for a herpetologist. Next time, I need to arrive a few days in advance in order to catch the whole spectacle!