22 Mar Visitors at the Osa Biodiversity Center in 2009

Posted at 06:30h in Science and Research, Volunteers and Visitors by turtle 0 Comments 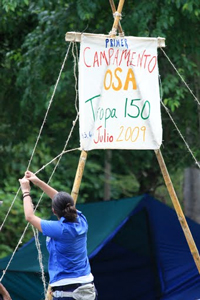 The Guides and Scouts of Puerto Jiménez, joined by a troop from Pérez Zeledón, went to the OBC to put in practice their camping skills for the first time, in an improvised camp set up by the children.

A group of forestry engineers from the Cartago Technological Institute, in partnership with CATIE and the University of Connecticut, established a series of plots in the surroundings of the OBC to determine forest structure at different stages of succession and document carbon sequestration.

Adrián García, working with bioacoustics in amphibians, has visited the OBC several times to record the songs of various species. His research is part of a project funded by an Evergreen grant.

Stuart Jeckel, of the University of North Carolina, was in the OBC in search of the Túngara frog Engystomops pustulosus, as he is studying their breeding behavior at the neural level.

Guido Saborio keeps impressing volunteers at OBC. He received this message from one of them who spent three weeks at the center:

Karen Masters brought a student group to Cerro Osa for their Sustainability and the Environment course.  They inaugurated the new camping platforms and composting latrines. 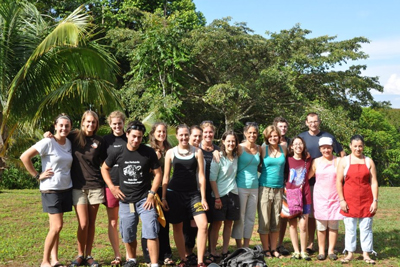