Posted at 16:00h in Uncategorized by InternUser Osa Conservation 0 Comments

The stars overhead were fading into the pale blue dawn as we entered the jungle. Under the thick cover of the canopy, darkness had not yet given way to sunrise, so we relied on the beams of our headlamps to illuminate our path along the Ajo trail. I hiked behind Tabea, who manages the wildcat monitoring program in one of her many hats at Osa Conservation. Just a few minutes down the trail, Tabea stopped short, her light trained on the blanket of fallen leaves underfoot. “There,” she pointed to a gap in the leaf litter, where the leaves had been pushed back to reveal bare ground underneath. “That’s fresh. It’s a puma scent mark.” 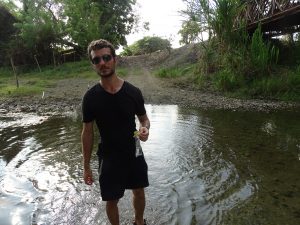 Tabea and I came across several more scent marks left by a resident puma as we continued on with the purpose of our early-morning hike: checking on camera traps. Osa Conservation has a network of 18 (and counting) motion-sensored cameras deployed on- and off-trail around its property. Data collected from the cameras help to monitor populations of mammals, including wildcats, in a non-invasive way. Camera traps are the cornerstone of Osa’s wildcat monitoring program, which I have supported for a month as a volunteer. So far, I’d seen a few camera trap pictures of ocelots prowling by in the middle of the night, but the puma scent mark was the first sign I’d seen in person that there really were wildcats in this forest (and less than 100 meters from the cabinas where we slept).

We never actually saw the puma on our hike, though we did find a mother and baby tamandua along with two troops of spider monkeys. It wasn’t until later in the day, when we looked at the pictures from the Ajo trail camera trap, that we realized how close we had come to the jungle’s top predator: the puma was photographed walking the trail less than two hours before we started our hike. Truthfully, we could have walked right by it and never known. The puma is one of the most silent creatures of the forest. 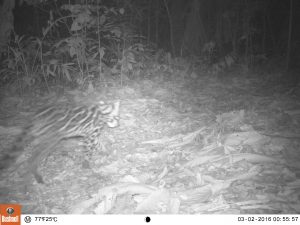 Experiences like that are why I have loved participating in the wildcat monitoring program over the past month. The Osa Peninsula is famed as one of the most biologically intense places on Earth, yet it is impossible to fully witness the scope of that biodiversity when you’re tramping through the forest in rubber boots. (However much we like to think we’re being stealthy, the animals almost always hear us coming before we hear, or see, them.) Viewing and analyzing pictures from motion-sensored cameras allowed me to become familiar with mammal species I would never otherwise have seen in the forest, from the nocturnal paca, to the rare white-lipped peccary, to the elusive jaguarundi.

More importantly, I have been able to make tangible contributions to mammalian conservation efforts in the Osa as a volunteer with the wildcat monitoring program. I logged and organized data on camera trap mammal sightings going back six months and more. I recommended deployment of a new camera trap along the Piro River, to facilitate study of how mammals use one of the area’s only year-round freshwater sources. I crunched the existing camera trap data to determine the estimated abundance of different wildcat and prey species in the area, and presented my findings at the end of my time in the Osa to a group of staff, volunteers, and students. My presentation not only gave a sense of closure to my work as a volunteer, but also created a template for future volunteers to repeat and expand on my analysis.

The lessons that I’ve learned with Osa Conservation will be put to good use as I continue to travel through the spring, volunteering on other conservation projects around the world. Beyond that, I don’t know where my environmental career path will lead. But I do know that my passion for conservation is stronger than ever before, and I will be daydreaming about monkeys, tamanduas, and especially pumas for a long time to come.