02 May What is studying forests in the Osa Peninsula like?

Posted at 01:13h in Science and Research by Intern Osa Conservation 0 Comments

Since I was a young boy, I have felt a great fascination toward natural life. I was eager to learn about everything that composes and occurs in its systems. Every time I had the chance, I asked my parents to go out to a National Park, and I would rather celebrate my birthday – or any important date – outside instead of at a party or in the city. Also, for me it was more fun to watch a wildlife documentary than a cartoon. 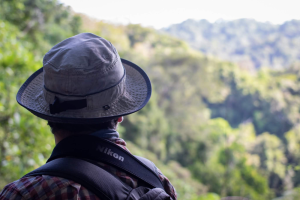 When it was time to pick my profession, I knew it had to be centered on the natural world. As forests and trees are by biggest passion, I chose forest engineering. From there, I have focused on tropical dendrology and botany, though I am still interested in any living thing. 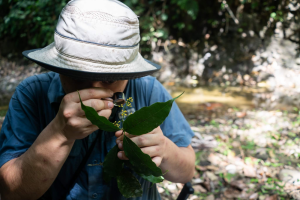 Studying forests and plants in the Osa Peninsula is a huge challenge. First off, the region is a hotspot for biodiversity with an immense number of species, many of which are rare, endemic (only found in a particular zone) or unknown. Second off, you have to deal with poorly accessible places, difficult conditions, mosquitos, ticks, venomous snakes and many other things. One day, while on expedition, I was walking down a steep rocky  slope when all of a sudden my feet started slipping and I began to slide. I didn’t know where I was going to end up. Luckily, I was able to grasp on to some bushes and everything was fine – nothing but a few scratches. Moments like that make field work even more exciting, and remind you that in any moment, everything can go wrong. 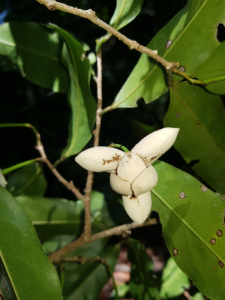 A sample of Klarobelia stipitata an endemic species to Central and Southern Pacific of Costa Rica. Photo: Lucy Kleiner.

At the end of the day, these activities are always gratifying. They take you to new discoveries, amazing animals, travel to recondite impressive places and gradually learn what the forests have to offer. 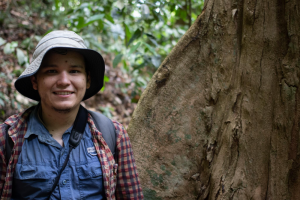 Next to a Paramachaerium gruberi tree, a very rare and endangered species. Photo: Lucy Kleiner.

It is a great honor and a great challenge to expand our regional knowledge and contribute to the conservation of forests and species of the Osa Peninsula.