Posted at 09:40h in Uncategorized by InternUser Osa Conservation 0 Comments

Bats Around the World

When you hear “bat”, what do you think of? A small, hairy creature that is active  in the darkest hours of the night and who sleeps upside down? (That’s what I think of!)  And it’s true! But there is so much more to bats than that. Did you know that bats are the second largest order of mammals in the word? In fact, there are more than 1,300 bat species worldwide and they represent about 20% of all classified mammal species! And, they play a huge, often underappreciated role in ecosystems across the globe.  Humans may have a lot to learn from these nighttime predators as they are critical to pollination, reforestation, and even pest control.

First, a little background.  Bats are categorized into two groups.  The first are the fruit-eating megabats (also known as flying foxes).  This group makes up 30% of bat species, and, as their name suggests, they consume various types of fruit.  The second group is the echolocating microbats, which makes up the other 70% of bat species.  The bats in this group use echolocation, a sort of  night vision to hunt and consume small insects. 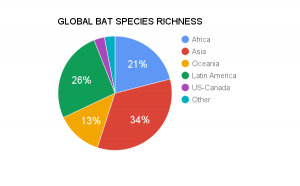 Not only do bats make up a huge chunk of mammals, but they are found worldwide.  34% of all bat species are found in Asia, 26% in Latin America, 21% in Africa, 13% in Oceania, and 6% in the US/Canada and other regions. While often overlooked, bats are key to the ongoing success of many ecosystems–both as pollinators and predators working to keep insect populations under control.

Bats in the Tropics

The warm weather and constant availability of fruit in the Tropics makes it a paradise for fruit-eating bats who live there in abundance.  However, insectivorous bats, vampire bats, and nectar-feeding bats are also very common in the rich, warm, biodiverse ecosystems of this region.

Fruit bats vary in size, from around two inches in length up to a whopping 16 inches with a wingspan of over five feet at their largest! The tiniest bats weigh a few ounces while the biggest ones can even weigh a few pounds. Additionally, fruit-eating bats have very large eyes and excellent vision, so they depend mostly on sight and their sophisticated sense of smell for daily activities such as foraging for fruit. 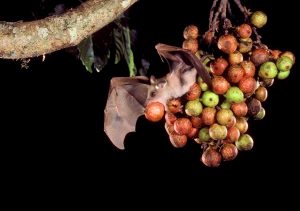 Non-fruit-eating bats, or the echolocating microbats eat mostly insects.  Insectivores and other carnivorous bats lack the superior eyesight of the fruit-eating bats and rely on echolocation to find and consume their prey.  Surprisingly, this lack of eyesight is not at all a disadvantage for these bats.  In fact, a single echolocating bat can consume over 3,000 insects in one night!

Nectar-feeding bats are important pollinators of tropical rainforest plants. Like fruit-eating bats, nectar-feeding bats rely on sight to locate their primary source of food: flower nectar. To gain access into those hard-to-reach flowers, these bats are equipped with a long, thin tongue, like that of a hummingbird!  As they rub up against the flowers to reach the prized nectar, they become vital pollinators for the rainforest.

Vampire bats have a reputation as the scary creatures from horror films, but in reality they feed on farm animals in tropical regions.  They use their chisel-like incisor teeth to make a tiny incision in the animal’s skin in the darkest hours of the night to avoid predators.

Why are Bats Important as Pollinators?

Bats pollinate many ecologically and economically important plants around the world. In fact, there are at least 500 species of flowers that rely on bats as their pollinators. While more common pollinators like butterflies and birds are general pollinators (meaning they collect pollen from many different plants), bats have specific preferences when it comes to which flowers they pollinate.  Many of these unique flowers have even evolved to attract bats as opposed to other, general pollinators.  Some of these adaptations include always being open at night (ready for pollination and closed during the day), large in size, pale in color, and very fragrant with a fermenting or fruit-like odor.  Often times, the flowers offer a copious amount of dilute nectar to attract the bats. 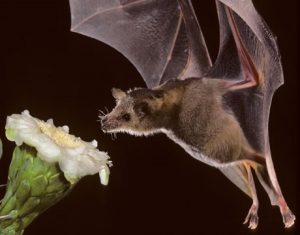 In addition to the beautiful flowers, bats do great favors in pollinating other plants. In Australia, flying foxes, nectar, and fruit eating mega bats, pollinate the dry eucalyptus forests that produce timber and oil for human use. Mexican agave plants, a source of fiber and a key ingredient for tequila, are additionally dependent on the pollination services of several types of nectar-feeding bats. Thanks to bats, we have a variety of excellent resources.

Not only do bats love eating fruit, but they are also crucial in providing humans with a variety of fruits.  Mangoes, bananas, guavas, and peaches are just a few of these delicious fruits that are predominantly pollinated by bats.

Deforestation of the Tropics is a huge, worldwide issue. And, believe it or not, fruit-eating bats play a critical role in dealing with this issue!  Bats are super effective in that they widely disperse seeds to degraded, deforested areas.  The bat world is exceptionally diverse and abundant, with a variety of canopy and understory feeding habits.  Their ability to fly (and quickly!) allows them to cover large distances during their nightly foraging flights, allowing them to reach deforested and degraded areas of the forest more easily than any human.

Some German scientists have done related research, further reiterating the fact that bats are crucial to reforestation efforts.  In one study, artificial bat roosts were installed in some deforested areas to attract  more bats to the region.  Evidence from the study showed that that there were, in fact, significant increases in seed dispersal over this wide range of sparse forest!  Bats are a fantastic and natural way to help us speed up forest regeneration.

Bats in the Osa!

There are many bat species in Osa. According to the research done by Doris Audet at Osa Conservation’s Piro BioStation, 33 species of bats from six families have been identified over the course of  32 nights of sampling. Phyllostomidae (leaf-nosed bats) were the predominant family in the captures. The presence of a diverse bat population in Osa Conservation’s old growth properties demonstrates that the forest is strong and healthy.  Additionally, their presence will be a huge aid in the regeneration of some of the previously degenerated areas. 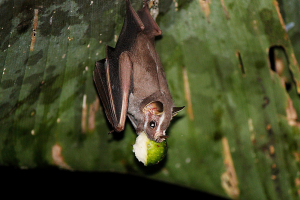 Bats are potentially some of the most overlooked and forgotten about creatures of the forest, yet they play a huge role.  Not only do they keep pest populations low, but they also pollinate our plants and help restore the forest.  Understanding their role in both the ecosystem and the human world is crucial to their conservation and continued success and appreciation.  Thank you bats!!