On the 28th of July we received a visit at Piro Biological Station from 9 educators who are currently working throughout the Osa Peninsula and the Golfito region. 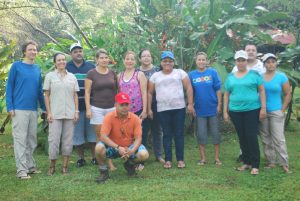 A photo of the workshop participants and Osa staff.

Thanks to the help and directive from SEE Turtles, we managed to organize an successful and informative educational workshop on marine sea turtle conservation. During the day professors learned about sea turtle species biology, while also learning techniques to help motivate their students and to help the professors achieve a more dynamic and interactive learning environment in their classrooms. 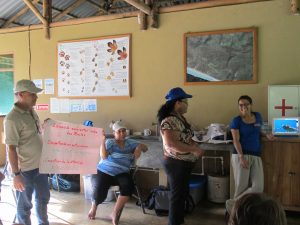 A workshop presentation being given by participants.

At night the workshop participants accompanied Manuel Sanchez, Osa Conservation’s Marine Sea Turtle Program Manager, through his nighttime patrols of the Piro region. During these nocturnal patrols recordings of sea turtle activities are monitored – such as egg laying, nest counting, and sea turtle tracks. After a 30 minutes night-time patrol we managed to observe from afar a dark line in the beach which had been made as a result of tracks from an Olive Ridley sea turtle. Once we reached the high-tide line we discovered a half prepared nest in the roots of a palm tree that lead us to believe the sea turtle had been unable to excavate the incubation chamber and returned to the sea to find another nearby location that might merit better results at a later time. We also visited Osa Conservations sea turtle nursery where currently 25 nests are being housed, one of the nests being that of a Hawksbill sea turtle, one of the most endangered species in the world. 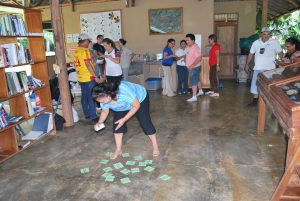 Sharing a game which might be used as a method for further engaging students.

Although the workshop was unable to observe an actual nesting process, the professors did have the experience of being able to participate in the arduous work implemented every night on the nest-patrol throughout Osa beaches, which will in the long run help with the conservation of these beautiful and enigmatic creatures.