Posted at 17:15h in Uncategorized by projects 0 Comments 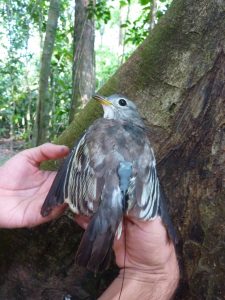 Female Yellow-billed Cotinga on the day of her tagging Feb. 15, 2011

It really is like no other bird that I have seen. These birds are truly beautiful with movements and behavioral characteristics unique to its species.   These big black eyes belong to a male Yellow-billed Cotinga (Carpodectes antoniae), a highly endangered Costa Rican resident bird species.  It is also know locally as the Cotinga Piquiamarillo.

He is just one of a dwindling number remaining here in the southern pacific coastal slope of Costa Rica and hopefully the north pacific coast of Panama.  I say hopefully because historically this species was found on both sides of the border inhabiting coastal mangroves and adjacent mixed rainforest.  Loss and degradation of habitat for this regional endemic bird is the main cause of its decline with a population estimated to only be somewhere between 250 – 799 birds remaining.  Because of the several intact mangroves that are found around the Golfo Dulce and up around Térraba-Sierpe National Wetlands of Costa Rica, the Osa Peninsula and its environs now appears to be this species one and only remaining stronghold.

The male and the female look quite different; the female sporting a mottling of gray, white and black on her wings and back while the male is a stunning pure white with slight hints of soft light gray all over.  Its signature yellow beak with its central black stripe is what sets it apart from the

Snowy Cotinga, its closest relative found on the Caribbean slope of Costa Rica.  You won’t find much yellow in the females’ beak however except along the base of the bill.  The fledglings look like mom while the sub-adult males, probably not much older than one year, have that in-between look going on.   As far as vocalizations are concerned any form of communication that may be used between individuals is not readily apparent to those of us on the ground.

Now picture about 6 male Yellow-billed Cotingas in a single tree snag branching out in all directions each male swooping down and back up into an adjacent tree, mostly leafless or semi-leafless, all in an effort to gain the attention of a nearby female.  Just imagine a gymnast on parallel bars.  This is the courtship display and is also a movement that is seen by males throughout the breeding season.   Once the female has made her choice it is thought that she then takes on 100% of all parental duties.  The males spend their time feeding and returning to their core areas to make their territorial rounds day in and day out.

So let’s go back for a second and let me reiterate something before moving on.  There may be as few as 250 Yellow-billed Cotingas remaining on the planet, not found anywhere else!

Because of this, Friends of the Osa in partnership with the American Bird Conservancy took on the task of investigating this species actual distribution in a study completed in 2009, and a more specifically aimed study currently looking at its habitat use patterns and its spatial and temporal movements during the reproductive and non-reproductive times of the year. 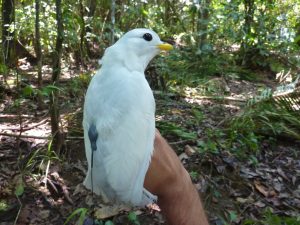 We are able to determine the birds movements via radio telemetry.  We have placed small radio transmitters on three cotingas, one adult female and two adult males from a small population which breeds in the mangroves of Rincon de Osa located on the north end of the Osa Peninsula along the Golfo Dulce.  We have been able to follow all three birds around their breeding grounds via their radio frequency signals since their capture in mid February.

Essentially what we have done is take geographic satellite positions (waypoints) of birds locations throughout the day using a hand held GPS unit.  With an accumulation of waypoints we are now able to determine each individual’s home range which is basically the size and configuration of the area the bird occupies or uses.  As the birds disperse into other areas of the peninsula during the winter months between June and December we will track their movements and map the areas used in order to more precisely determine which areas are in need of protection and possible conservation measures.

Not only will results from this study reveal important patterns of movements throughout the year of the Yellow-billed Cotinga, it will also serve to safeguard sensitive mangrove habitats and better protect other species which also rely on the mangrove and rainforest ecosystems unique to this part of the world.

Other species to keep an eye on that specifically rely on mangroves are the Mangrove Hummingbird which is a Costa Rica endemic species and the Prothonotary Warbler, a North American  migratory songbird.

We would like to take this opportunity to thank George and Luke Powell for their tireless assistance in capture techniques (including net construction and radio harness placement) as well as home range data analysis, and to Luis Vargas for his energy and tenacity during many weeks of work towards what ended up being a successful capture and beyond- high tides and all! Thanks to Manuel, Courtney and Christina for all the long hours climbing mangroves and wading through rivers.  We would also like to thank the owners of El Chontal Cabinas, and ADEPAS for providing us lodging and the staff of Friends of the Osa for constant support and feedback.  Thanks also goes out to Optics for the Tropics for their donation of binoculars for field staff and to Andrew Judd Pruter of Psycho Tours for supporting this project with climbing equipment used during the cotinga capture.   And this list is growing…